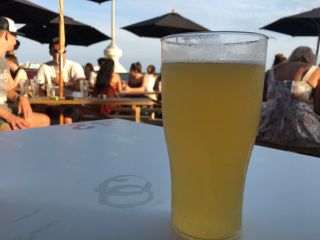 The weather’s been pretty good lately. That shouldn’t be a surprise seeing as it’s the middle of June but this is England.

Brighton really shows its best side in the sunny weather (once everyone’s done starting fires with unattended barbecues). We get to have picnics out on the deck at the Clearleft office. And sometimes we end the day on the beach having a nice cold beer.

But today it was pissing down.

Cue the usual weather banter about summer being all done.

It cleared up in the afternoon and the sun came out. Makes you appreciate it even more.

It’s summertime. Suddenly everything green seems to be growing with amazing fecundity. It’s quite something to see so much life blooming all at once.

Jessica and I have two little patches of earth in raised beds in our back garden. Right now they’re positively overflowing with lettuces: mustard greens, rocket, and a lovely variety called “marvel of four seasons”. Collectively they are the gift that keeps on giving. I can go out in the evening and harvest a great big bowlful of salad, and by the time I go out the next evening, there’s a whole new green feast waiting.

I’m back in Brighton after a thoroughly lovely weekend in Ireland. I must remember to visit Cobh more often in the summertime when there’s quite a lot of fun things to do.

But it’s nice to be back in Brighton too. This is the time of year when a seaside town really comes alive. And this is a particularly good week to be in Brighton—in just a few more days it’ll be time for third and final Responsive Day Out. I know it’s going to be an excellent event, packed with great talks. I’m really looking forward to it.

Summer burst into life today. The sun shone out of a clear bright blue sky, warming up the ground and the air below.

This weather suits Brighton. The town was positively preening. Admittedly the town centre was pretty much like any other town centre on a hot day, but if you went down to the seafront you’d have seen a beautiful sight. The water was so calm and placid, its surface broken only by the occasional paddle board or kayak.

Today was the perfect day to get a sandwich, hunker down on the beach’s pebbles and fight off feral seagulls.