I’ve published a transcription of the talk I gave at CSS Day:

In And Out Of Style.

The title is intended to have double meaning. The obvious reference is that CSS is about styling web pages. But the talk also covers some long-term trends looking at ideas that have appear, disappear, and reappear over time. Hence, style as in trends and fashion.

There are some hyperlinks in the transcript but I also published a list of links if you’re interested in diving deeper into some of the topics mentioned in the talk.

I also published the slides but, as usual, they don’t make much sense out of context. They’re on Noti.st too.

I made an audio recording for your huffduffing pleasure.

There are two videos of this talk. On Vimeo, there’s the version I pre-recorded for An Event Apart online. On YouTube, there’s the recording from CSS Day.

It’s kind of interesting to compare the two (well, interesting to me, anyway). The pre-recorded version feels like a documentary. The live version has more a different vibe and it obviously has more audience interaction. I think my style of delivery suits a live audience best.

I invite you to read, watch, or listen to In And Out Of Style, whichever you prefer.

But I felt bad bashing Safari. It felt like a pile-on. That’s because a lot of people have been venting their frustrations with Safari recently:

I think it’s good that people share their frustrations with browsers openly, although I agree with Baldur Bjarnason that’s good to avoid Kremlinology and the motivational fallacy when blogging about Apple.

It’s also not helpful to make claims like “Safari is the new Internet Explorer!” Unless, that is, you can back up the claim.

On a recent episode of the HTTP 203 podcast, Jake and Surma set out to test the claim that Safari is the new IE. They did it by examining Safari according to a number of different measurements and comparing it to the olden days of Internet Explorer. The result is a really fascinating trip down memory lane along with a very nuanced and even-handed critique of Safari.

And the verdict? Well, you’ll just to have to listen to the podcast episode.

If you’d rather read the transcript, tough luck. That’s a real shame because, like I said, it’s an excellent and measured assessment. I’d love to add it to the links section of my site, but I can’t do that in good conscience while it’s inaccessible to the Deaf community.

When I started the Clearleft podcast, it was a no-brainer to have transcripts of every episode. Not only does it make the content more widely available, but it also makes it easier for people to copy and paste choice quotes.

Still, I get it. A small plucky little operation like Google isn’t going to have the deep pockets of a massive corporation like Clearleft. But if Jake and Surma were to open up a tip jar, I’d throw some money in to get HTTP 203 transcribed (I recommend getting Tina Pham to do it—she’s great!).

I apologise for my note of sarcasm there. But I share because I care. It really is an excellent discussion; one that everyone should be able to access.

Update: the bug with that episode of the HTTP 203 podcast has been fixed. Here’s the transcript! And all future episodes will have transcripts too:

Some folks called us out for lacking transcripts for our podcasts. Fair point! So, here we go (and all future episodes will have transcripts)https://t.co/HmfwBvAicA

Aral recently released the videos from last September’s Update conference. You can watch the video of my talk if you like or, if video isn’t your bag, I’ve published a transcription of the talk.

It’s called One Web, Many Devices and I’m pretty happy with how it turned out. It’s a short talk—just under 17 minutes—but I think I made my point well, without any um-ing and ah-ing. At the time I described the talk like this:

I went in to the lion’s den to encourage the assembled creative minds to forego the walled garden of Apple’s app store in favour of the open web.

It certainly got people talking. Addy Osmani wrote an op-ed piece in .net magazine after seeing the talk.

The somewhat contentious talk was followed by an even more contentious panel, which Amber described as Jeremy Keith vs. Everyone Else. The video of that panel has been published too. My favourite bit is around the five-minute mark where I nailed my colours to the mast.

Me: Give it time.

But I am creating stuff that can be accessed on all those devices because an iPhone and Windows Phone 7 and Android—they all come with web browsers.

I was of course taking a deliberately extreme stance and, as I said at the time, the truthful answer to most of the questions raised during the panel discussion is “it depends” …but that would’ve made for a very dull panel.

Unfortunately the audio of the talks and panels from Update hasn’t been published—just videos. I’ve managed to extract an mp3 file of my talk which involved going to some dodgy warez sitez.

I wish conference organisers would export the audio of any talks that they’re publishing as video. Creating the sound file at that point is a simple one-click step. But once the videos are up online—be it on YouTube or Vimeo—it’s a lot, lot harder to get just the audio.

Not everyone wants to watch video. In fact, I bet there are plenty of people who listen to conference talks by opening the video in a separate tab so they can listen to it while they do something else. That’s one of the advantages of publishing conference audio: it allows people to catch up on talks without having to devote all their senses. I’ve written about this before:

Not that I have anything against the moving image; it’s just that television, film and video demand more from your senses. Lend me your ears! and your eyes. With your ears and eyes engaged, it’s pretty hard to do much else. So the default position for enjoying television is sitting down.

A purely audio channel demands only aural attention. That means that radio—and be extension, podcasts—can be enjoyed at the same time as other actions; walking around, working out at the gym. Perhaps it’s this symbiotic, rather than parasitic, arrangement that I find engaging.

When I was chatting with Jesse from SFF Audio he told me how he often puts video podcasts (vodcasts?) on to his iPod/iPhone but then listens to them with the device in his pocket. That’s quite a waste of bandwidth but if no separate audio is made available, the would-be listener is left with no choice.

So conference organisers: please, please take a second or two to export an audio file if you’re publishing a video. Thanks.

I spoke at the DIBI conference back in June. It was a really good event, despite its annoying two-track format.

My talk was entitled One Web:

The range of devices accessing the web is increasing. We are faced with a choice in how we deal with this diversity. We can either fracture the web by designing a multitude of device-specific silos, or we can embrace the flexibility of the web and create experiences that can adapt to any device or browser.

The video has been online for a while now and I finally got ‘round to getting it transcribed. You can pop on over to the articles section and read One Web. I should really re-name that section of my site: “articles” isn’t the most accurate label for a lot of the stuff there.

If you prefer listening to reading, the audio is available for your huffduffing pleasure.

I also put the slides on Speakerdeck so you play along with the presentation.

I reprised this talk in Italy recently at the From The Front gathering. The audio from that is also online if you want to compare and contrast. 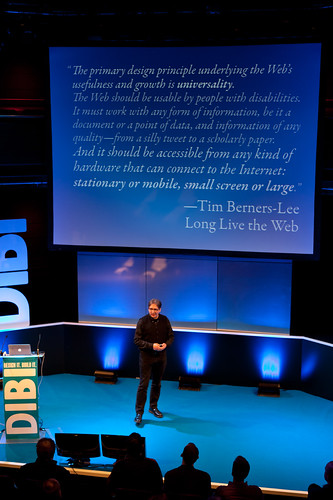 As ever, I had a lot of fun moderating the hot topics panel at this year’s Web Directions @media in London. Thanks to all of you who left questions on my blog post.

I had a great line-up of panelists:

We discussed publishing, mobile, browsers, clients and much much more. The audio is available for your huffduffing pleasure and I’ve had it transcribed. I’ve published the transcription over in the articles section of this site, so if you prefer reading to listening, I direct your attention to:

Remember that mobile browser panel I moderated at the Mobilism conference in Amsterdam earlier this year? Well, I’ve had the whole thing transcribed. You can now: