I think some tools are a good idea. But as few as possible, and the easier they are to stop using, the better.

Suppose we want to stop using Tailwind one day?

Turns out it’s a bit of a roach motel, much like most JavaScript frameworks: you can get in but you can’t easily get out.

So whenever possible, the safest, and most future-proof bet is to use the native features of the web platform.

Why I don’t miss React: a story about using the platform - Jack Franklin

This is a great case study of switching from a framework mindset to native browser technologies.

Though this is quite specific to Jack’s own situation, I do feel like there’s something in the air here. The native browser features are now powerful and stable enough to make the framework approach feel outdated.

And if you do want to use third-party dependencies, Jack makes a great case for choosing smaller single-responsibility helpers rather than monolithic frameworks.

Replacing lit-html would be an undertaking but much less so than replacing React: it’s used in our codebase purely for having our components (re)-render HTML. Replacing lit-html would still mean that we can keep our business logic, ultimately maintaining the value they provide to end-users. Lit-Html is one small Lego brick in our system, React (or Angular, or similar) is the entire box.

I think Jim is onto something here. The more dependencies you have in your build process, the likelier it is that over time one of them will become a single point of failure. A progressive enhancement approach to build tools means you’d still be able to launch your site (even if it’s not in its ideal state).

I want to be able to view, edit, and if need be ship a website, even if the build process fails. In essence, if the build does fail I can still take all the source files, put them on a server, and the website remains functional (however crude).

Blogging and the heat death of the universe • Robin Rendle

A cautionary tale on why you should keep your dependencies to a minimum and simplify your build process (if you even need one):

If it’s not link rot that gets you then it’s this heat death of the universe problem with entropy setting in slowly over time. And the only way to really defend against it is to build things progressively, to make sure that you’re not tied to one dependency or another. That complex build process? That’s a dependency. Your third party link to some third party font service that depends on their servers running forever? Another dependency.

Robin Rendle ･ The web is too damn complex

The modern web wouldn’t be possible without big ol’ JavaScript frameworks, but—but—much of the web today is held back because of these frameworks. There’s a lot of folks out there that think that every website must use their framework of choice even when it’s not necessary. And although those frameworks solve a great number of problems, they introduce a substantial number of trade-offs; performance issues you have to deal with, complex build processes you have to learn, and endless dependency updates that can introduce bugs.

So it’s not even so much about being wary of React or Vue, it’s about not making assumptions, being cautious and cognizant of future needs or restrictions when proposing a tech stack. Any tech stack you choose will ultimately become a ball-and-chain, not just those based on JavaScript frameworks. It’s just that the ball can sometimes be heavier than it needed to be, and you can anticipate that with a little foresight.

I never knew that the way I add other people’s code to my projects is called “vendoring.” I thought it was just copying and pasting.

How I Build JavaScript Apps In 2021

My stack will outlive yours

My stack requires no maintenance, has perfect Lighthouse scores, will never have any security vulnerability, is based on open standards, is portable, has an instant dev loop, has no build step and… will outlive any other stack.

I’m very selective about how I depend on other people’s work in my personal projects. Here are the factors I consider when evaluating dependencies.

I really like Rob’s approach to choosing a particular kind of dependency when working on the web:

When I’m making things, that’s how I prefer to depend on others and have them depend on me: by sharing strong, simple ideas as a collective, and recombining them in novel ways with rigorous specificity as individuals.

Everything is Amazing, But Nothing is Ours – alexdanco.com

Worlds of scarcity are made out of things. Worlds of abundance are made out of dependencies. That’s the software playbook: find a system made of costly, redundant objects; and rearrange it into a fast, frictionless system made of logical dependencies. The delta in performance is irresistible, and dependencies are a compelling building block: they seem like just a piece of logic, with no cost and no friction. But they absolutely have a cost: the cost is complexity, outsourced agency, and brittleness. The cost of ownership is up front and visible; the cost of access is back-dated and hidden.

The Appification of Everything & Why it Needs to End

Amber writes on Ev’s blog about products that deliberately choose to be dependent on smartphone connectivity:

We read service outage stories like these seemingly every week, and have become numb to the fundamental reality: The idea of placing the safety of yourself, your child, or another loved one in the hands of an app dependent on a server you cannot touch, control, or know the status of, is utterly unacceptable.

When you ever had to fix just a few lines of CSS and it took two hours to get an ancient version of Gulp up and running, you know what I’m talking about.

When everything works, it feels like magic. When something breaks, it’s hell.

I concur with Bastian’s advice:

I have a simple rule of thumb when it comes to programming:

And this observation rings very true:

This dependency hell is also the reason why old projects are almost like sealed capsules. You can hardly let a project lie around for more than a year, because afterwards it’s probably broken.

Here’s an accompanying article on the same topic. 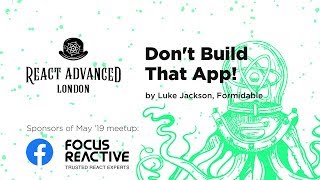 Why Did I Have Difficulty Learning React? - Snook.ca

When people talk about learning React, I think that React, in and of itself, is relatively easy to understand. At least, I felt it was. I have components. I have JSX. I hit some hiccups with required keys or making sure I was wrapping child elements properly. But overall, I felt like I grasped it well enough.

Throw in everything else at the same time, though, and things get confusing because it’s hard at first to recognize what belongs to what. “Oh, this is Redux. That is React. That other thing is lodash. Got it.”

React is an ecosystem. I feel like it’s a disservice to anyone trying to learn to diminish all that React entails. React shows up on the scene with Babel, Webpack, and JSX (which each have their own learning curve) then quickly branches out into technologies like Redux, React-Router, Immutable.js, Axios, Jest, Next.js, Create-React-App, GraphQL, and whatever weird plugin you need for your app.

I think we’re often guilty of assuming that because our tools are great solutions for some things, they’re automatically the solution for everything.

What is tree shaking and how does it work?

The context here is JavaScript, not apples or olives.

This is yet another great explainer from Ire. Tree shaking is one of those things that I thought I understood, but always had the nagging doubt that I was missing something. This article really helped clear things up for me.

Dave on the opaqueness of toolchains:

As toolchains grow and become more complex, unless you are expertly familiar with them, it’s very unclear what transformations are happening in our code. Tracking the differences between the input and output and the processes that code underwent can be overwhelming. When there’s a problem, it’s increasingly difficult to hop into the assembly line and diagnose the issue.

There’s a connection here to one of the biggest issues with what’s currently being labelled “AI”:

In the same way AI needs some design to show its work in how it came to its final answer, I feel that our automated build tools could use some help as well.

I really like this suggestion for making the invisble visible:

I sometimes wonder if Webpack or Gulp or [Insert Your Build Tool Here] could benefit from a Scratch-like interface for buildchains.

Watch the prep time increase as you make more and more of a recipe’s ingredients from scratch.

I guess Carl Sagan was right. To make an apple pie from scratch, you must first invent the universe.

A typically superb article by Aaron. Here, he breaks down a resilient approach to building for the web by examining the multiple ways you could add a button to a page. There’s a larger lesson here too:

We don’t control where our web-based products go or how our users access them. All we can do is imagine as many less-than-perfect scenarios as possible and do our best to ensure our creations will continue to do what they’re supposed to do. One of the easiest ways to do that is to be aware of and limit our dependencies.