Get these down your earholes!

Remy has huffduffed all the audio from this year’s Full Frontal conference.

The video of my closing talk at this year’s Full Frontal conference, right here in Brighton.

I had a lot of fun with this, although I was surprisingly nervous before I started: I think it was because I didn’t want to let Remy down. 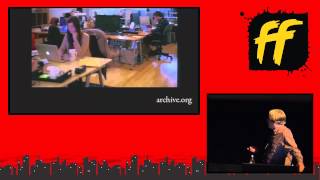 All the talks from this year’s excellent Full Frontal conference in Brighton, available in audio form for your huffduffing pleasure.

A terrific write-up of this year’s Full Frontal conference, with a descriptive rundown of each talk.

Some great thoughts from Mike Davies about the strengths of the web, prompted by some of the more extreme comments made by James Pearce at Full Frontal last week.

I should point out that James was being deliberately provocative in order to foment thought and discussion and, judging from this blog post, he succeeded.

The Web’s independence from the hardware and software platform people use is a feature. It’s better than cross-platform frameworks which are constantly criticised for not producing exact native-feeling apps on the multitude of platforms they run on. The Web is above that pettiness.

Steven Wittens, who gave a terrific talk all about maths at last week’s Full Frontal conference, describes his experience at that most excellent event.

Remy recounts the Jedi mind trick I used to get him to move Full Frontal to the Duke of Yorks cinema.