Whatever the merit of the scientific aspirations originally encompassed by the term “artificial intelligence,” it’s a phrase that now functions in the vernacular primarily to obfuscate, alienate, and glamorize.

I understand less than half of this great talk by Meredith L. Patterson, but it ticks all my boxes: Leibniz, Turing, Borges, and Postel’s Law.

As a resident of Brighton—home to the most beautiful of bandstands—this bit of background to their history is fascinating.

This starts as a good bit of computer science nerdery, that kind of answers the question in the title:

And so the takeaway here is bigger than just speculation about Turing completeness:

Given that CSS is a domain-specific language for styling user interface, this makes a lot of sense! CSS + HTML + Human = Turing complete.

A terrific six-part series of short articles looking at the people behind the history of Artificial Intelligence, from Babbage to Turing to JCR Licklider.

The history of AI is often told as the story of machines getting smarter over time. What’s lost is the human element in the narrative, how intelligent machines are designed, trained, and powered by human minds and bodies.

I can never keep these straight—this is going to be a handy reference to keep on hand.

Play the part of an AI pursuing its goal without care for existential threats. This turns out to be ludicrously addictive. I don’t want to tell you how long I spent playing this.

Keep your eye on the prize: remember that money (and superintelligence) is just a means to an end …and that end is making more paperclips.

There are some delightfully dark touches to this Cory Doctorow coming-of-age near-future short story of high school students seizing the means of production.

One day, a man name Alan Turing found a magic lamp, and rubbed it. Out popped a genie, and Turing wished for infinite wishes. Then we killed him for being gay, but we still have the wishes.

Then we networked computers together:

The network is ultimately not doing a favor for those in power, even if they think they’ve mastered it for now. It increases their power a bit, it increases the power of individuals immeasurably. We just have to learn to live in the age of networks.

We are all nodes in many networks. This is a beautiful description of how one of those networks operates.

Stephen Wolfram in The European magazine: I Like to Build Alien Artifacts

The true fathers of computing | Technology | The Observer

An interview with George Dyson, whose next book—Turing’s Cathedral—sounds like it’ll be right up my alley.

This may be one of the best pecha kuch— I mean, Ignite presentations I’ve ever seen. 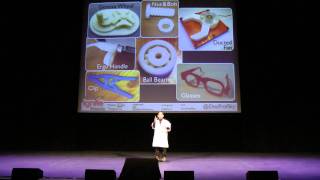 An API for Turing test questions.

A detailed document from Apple on their products' total carbon footprint.

Matt Webb's Interconnected (it's all confused and beautiful.)

George Dyson pays a visit to Google and describes it in the context of the history of computing.