The Internet Archive on the future of the web - Protocol — The people, power and politics of tech

A profile of Brewster Kahle and the Internet Archive:

Tech’s walled gardens might make it harder to get a perfect picture, but the small team of librarians, digital archivists and software engineers at the Internet Archive plan to keep bringing the world the Wayback Machine, the Open Library, the Software Archive, etc., until the end of time. Literally.

Homebrew Website Club is a regular gathering of people getting together to tinker on their own websites. It’s a play on the original Homebrew Computer Club from the ’70s. It shares a similar spirit of sharing and collaboration.

I started running Homebrew Website Club Brighton a while back. I tried the “every second Wednesday” thing, but it was tricky to make that work. People found it hard to keep track of which Wednesdays were Homebrew days and which weren’t. And if you missed one, then it would potentially be weeks between attending.

So I’ve made it a weekly gathering. On Thursdays. That’s mostly because Thursdays work for me: that’s one of the evenings when Jessica has her ballet class, so it’s the perfect time for me to spend a while in the company of fellow website owners.

There might be a Thursday when I’m not around, but it’s highly likely that Homebrew Website Club Brighton will happen anyway because either Trys, Benjamin or Cassie will be here.

There’s something else you should add to your calendar. We’re going to have an Indie Web Camp in Brighton on October 19th and 20th. I realise that’s quite a way off, but I’m giving you plenty of advance warning so you can block out that weekend (and plan travel if you’re coming from outside Brighton).

If you’ve never been to an Indie Web Camp before, you should definitely come! It’s indescribably fun and inspiring. The first day—Saturday—is a BarCamp-style day of discussions to really get the ideas flowing. Then the second day—Sunday—is all about designing, building, and making. The whole thing wraps up with demos.

It’s been a while since we’ve had an Indie Web Camp in Brighton. You can catch up on the Brighton Indie Web Camps we had in 2014, 2015, and 2016. Since then I’ve been to Indie Web Camps in Berlin, Nuremberg, and Düsseldorf, but it’s going to be really nice to bring it back home. 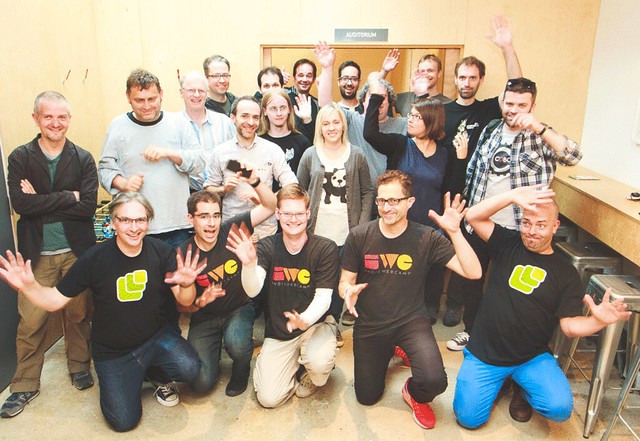 The event will be free to attend, but I’ll set up an official ticket page on Ti.to to keep track of who’s coming. I’ll let you know when that’s up and ready. In the meantime, you can register your interest in attending on the 2019 Indie Webcamp Brighton page on the Indie Web wiki.

I love the way that Benjamin is documenting his activities at Homebrew Website Club Brighton each week:

Homebrew website club is on every Thursday evening 6.00-7.30pm at Clearleft. You should come along!

Two of my favourite things: indie web and service workers.

This makes me so happy. I remember saying when my book came out, that the best feedback I could possibly get would be readers making their websites work offline. The same can be said for the talk of the book.

This Week in the IndieWeb Podcast by Marty McGuire

What an excellent idea! A weekly round-up in audio form of indie web and homebrew website news. Nice and short.

Chris is huffduffing it too.

Benjamin documents his experience at the first Brighton Homebrew Website Club: a most pleasant evening.

I really enjoyed the most recent Indie Web Camp in Brighton. Some of us were discussing at the event how it’s a shame that it only happens once or twice year, considering how much everyone manages to accomplish at each one.

Well, to help keep the momentum going, Charlotte and I are going to start running a Homebrew Website Club meetup here in Brighton. It’ll take place every second Wednesday in the auditorium—or, if that’s not available, the Clearleft office—here at 68 Middle Street from 6:30pm to 7:30pm (although myself and Charlotte will be there from 6pm so feel free to show up early).

There’s no set agenda to these meetups. Simply put, it’s a chance to work on your personal site or side project while in the company of either people doing the same thing. We can help each other out, or just have a chance to chat and compare notes, very much in the spirit of the original Homebrew Computer Club …but applied to your own website.

The first Brighton Homebrew Website Club meetup is on Wednesday, August 12th. It would be lovely to see you there.

Locking the Web Open, a Call for a Distributed Web | Internet Archive Blogs

What the Web Said Yesterday

A profile of the wonderful Internet Archive.

Brewster Kahle is my hero.

Kahle is a digital utopian attempting to stave off a digital dystopia. He views the Web as a giant library, and doesn’t think it ought to belong to a corporation, or that anyone should have to go through a portal owned by a corporation in order to read it. “We are building a library that is us,” he says, “and it is ours.”

Joshua Porter and Joshua Brewer will write one post a week, kickstarting a discussion on user experience.