Claire L. Evans on computational slime molds and other forms of unconvential computing that look beyond silicon:

In moments of technological frustration, it helps to remember that a computer is basically a rock. That is its fundamental witchcraft, or ours: for all its processing power, the device that runs your life is just a complex arrangement of minerals animated by electricity and language. Smart rocks.

A curl in every port

In the section on ports, Zach says:

The timeline of Gopher and HTTP can be evidenced by their default port numbers. Gopher is 70, HTTP 80. The HTTP port was assigned (likely by Jon Postel at the IANA) at the request of Tim Berners-Lee sometime between 1990 and 1992.

Ooh, I can give you an exact date! It was January 24th, 1992. I know this because of the hack week in CERN last year to recreate the first ever web browser.

Kimberly was spelunking down the original source code, when she came across this line in the HTUtils.h file:

We showed this to Jean-François Groff, who worked on the original web technologies like libwww, the forerunner to libcurl. He remembers that day. It felt like they had “made it”, receiving the official blessing of Jon Postel (in the same RFC, incidentally, that gave port 70 to Gopher).

Then he told us something interesting about the next line of code:

Port 2784? That seems like an odd choice. Most of us would choose something easy to remember.

Well, it turns out that 2784 is easy to remember if you’re Tim Berners-Lee.

Those were the last four digits of his parents’ phone number.

“Let us Calculate!”: Leibniz, Llull, and the Computational Imagination – The Public Domain Review

The characteristica universalis and the calculus racionator of Leibniz.

I understand less than half of this great talk by Meredith L. Patterson, but it ticks all my boxes: Leibniz, Turing, Borges, and Postel’s Law.

This is Not my Beautiful House: Examining the Desktop Metaphor, 1980-1995 | continent.

From Xerox PARC to the World Wide Web:

The internet did not use a visual spatial metaphor. Despite being accessed through and often encompassed by the desktop environment, the internet felt well and truly placeless (or perhaps everywhere). Hyperlinks were wormholes through the spatial metaphor, allowing a user to skip laterally across directories stored on disparate servers, as well as horizontally, deep into a file system without having to access the intermediate steps. Multiple windows could be open to the same website at once, shattering the illusion of a “single file” that functioned as a piece of paper that only one person could hold. The icons that a user could arrange on the desktop didn’t have a parallel in online space at all.

I am not a believer in the AI singularity — the rapture of the nerds — that is, in the possibility of building a brain-in-a-box that will self-improve its own capabilities until it outstrips our ability to keep up. What CS professor and fellow SF author Vernor Vinge described as “the last invention humans will ever need to make”. But I do think we’re going to keep building more and more complicated, systems that are opaque rather than transparent, and that launder our unspoken prejudices and encode them in our social environment. As our widely-deployed neural processors get more powerful, the decisions they take will become harder and harder to question or oppose. And that’s the real threat of AI — not killer robots, but “computer says no” without recourse to appeal.

The lines of code that changed everything.

We construct top-10 lists for movies, games, TV—pieces of work that shape our souls. But we don’t sit around compiling lists of the world’s most consequential bits of code, even though they arguably inform the zeitgeist just as much.

This is a fascinating way to look at the history of computing, by focusing in on culturally significant pieces of code. The whole list is excellent, but if I had to pick a favourite …well, see if you can guess what it is.

To decarbonize we must decomputerize: why we need a Luddite revolution | Technology | The Guardian

Decomputerization doesn’t mean no computers. It means that not all spheres of life should be rendered into data and computed upon. Ubiquitous “smartness” largely serves to enrich and empower the few at the expense of the many, while inflicting ecological harm that will threaten the survival and flourishing of billions of people.

With each year that goes by, it feels like less and less is happening on the device itself. And the longer our work maintains its current form (writing documents, updating spreadsheets, using web apps, responding to emails, monitoring chat, drawing rectangles), the more unnecessary high-end computing seems. Who needs multiple computers when I only need half of one?

At Dynamicland, The Building Is The Computer — Carl Tashian

A look at the ubiquitous computing work that Bret Victor has been doing over the past few years at Dynamicland.

A bit of a tangent, but I love this description of reading maps:

Map reading is a complex and uniquely human skill, not at all obvious to a young child. You float out of your body and into the sky, leaving behind the point of view you’ve been accustomed to all your life. Your imagination turns squiggly blue lines and green shading into creeks, mountains, and forests seen from above. Bringing it all together in your mind’s eye, you can picture the surroundings.

Chaos Design: Before the robots take our jobs, can we please get them to help us do some good work?

This is a great piece! It starts with a look back at some of the great minds of the nineteenth century: Herschel, Darwin, Babbage and Lovelace. Then it brings us, via JCR Licklider, to the present state of the web before looking ahead to what the future might bring.

So what will the life of an interface designer be like in the year 2120? or 2121 even? A nice round 300 years after Babbage first had the idea of calculations being executed by steam.

I think there are some missteps along the way (I certainly don’t think that inline styles—AKA CSS in JS—are necessarily a move forwards) but I love the idea of applying chaos engineering to web design:

Think of every characteristic of an interface you depend on to not ‘fail’ for your design to ‘work.’ Now imagine if these services were randomly ‘failing’ constantly during your design process. How might we design differently? How would our workflows and priorities change?

Before leading the software project that put men on the moon, Margaret Hamilton worked on the equations that led to chaos theory, followed by Mount Holyoke graduate, Ellen Fetter.

A terrific six-part series of short articles looking at the people behind the history of Artificial Intelligence, from Babbage to Turing to JCR Licklider.

The history of AI is often told as the story of machines getting smarter over time. What’s lost is the human element in the narrative, how intelligent machines are designed, trained, and powered by human minds and bodies.

Why Computer Programmers Should Stop Calling Themselves Engineers - The Atlantic

This article by Ian Bogost from a few years back touches on one of the themes in the talk I gave at New Adventures:

“Engineer” conjures the image of the hard-hat-topped designer-builder, carefully crafting tomorrow. But such an aspiration is rarely realized by computing. The respectability of engineering, a feature built over many decades of closely controlled, education- and apprenticeship-oriented certification, becomes reinterpreted as a fast-and-loose commitment to craftwork as business.

Photos from earlier this week:

In a small room in CERN’s Data Center, an international group of nine developers is taking a plunge back in time to the beginnings of the World Wide Web. Their aim is to enable the whole world to experience what the web looked like viewed within the very first browser developed by Tim Berners-Lee. 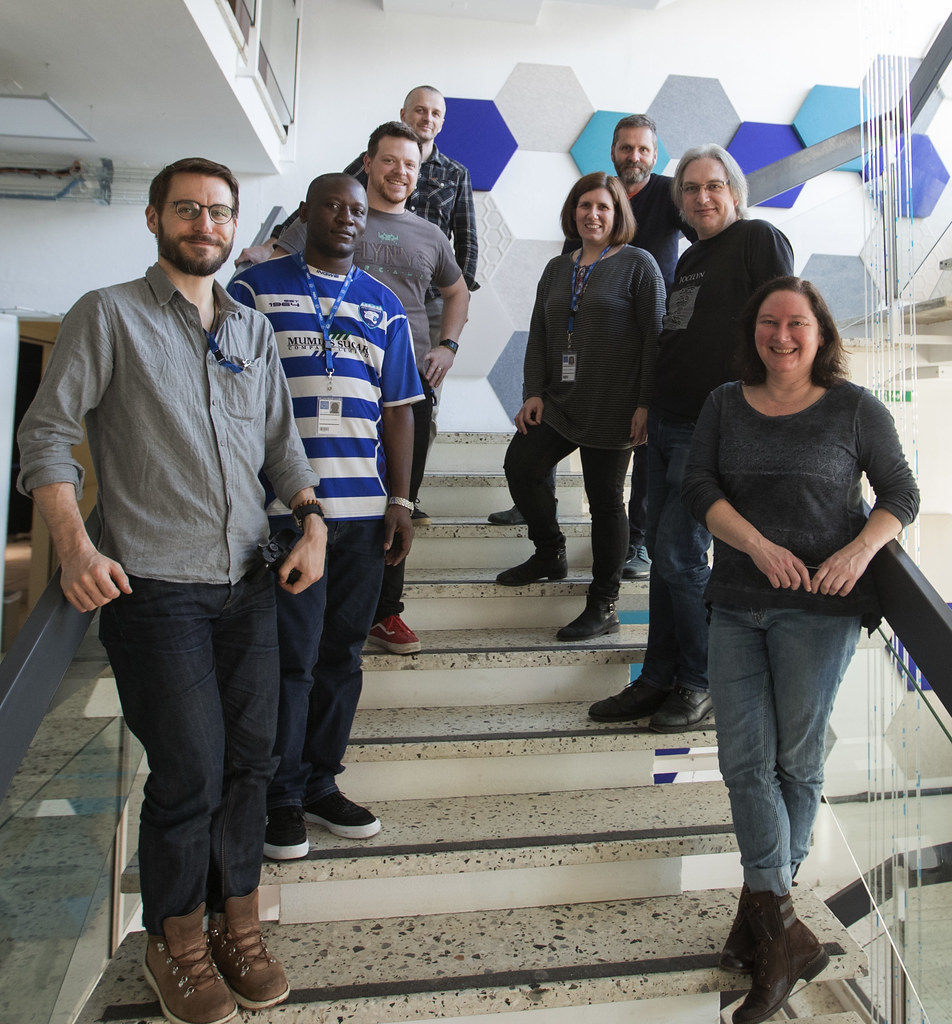 On the 50th anniversary of Vannevar Bush’s As We May Think, Tim Berners-Lee delivered this address in 1995.

To a large part we have MEMEXes on our desks today. We have not yet seen the wide scale deployment of easy human interfaces for editing hypertext and making links. (I find this constantly frustrating, but always assume will be cured by cheap commercial products within the year.)