This year’s dConstruct will be the tenth one. Ten! That’s a cause for celebration.

The very first dConstruct back in 2005 was a small affair. But we pulled off something off a coup by having the one and only Cory Doctorow deliver the closing talk. You can still listen to the talk—along with every dConstruct talk ever—at the dConstruct archive. 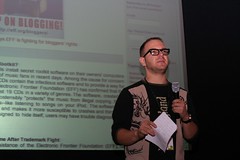 It’s a great talk that still holds up a decade later. Cory’s passion for freedom and technology (and maintaining the intersection of both) is palpable.

Here we are in 2014 and the theme for dConstruct is “Living With The Network.” Who better to deliver a keynote address than Cory Doctorow? I love the symmetry of having Cory at the first and the tenth dConstruct. Also: he’s absolutely bloody brilliant!

Get your ticket for dConstruct 2014 now. It’s going to be a magnificent day.

See you on September 5th!

Sometimes the good folk at HTML5doctor.com get asked questions that might be better suited for a real, medical doctor. These are those questions.

The HTML5 doctors are hosting a copy Mark Pilgrim’s Dive Into HTML5 at http://diveinto.html5doctor.com/ and they plan to keep it updated via Github.

Letters of Note: I think I no how to make people or animals alive

This is why, when a child posits something ridiculous-sounding, you should encourage them.

Doctor Who: The WebKit Implementation

A (webkit-only) CSS3/HTML5 take on the Doctor Who opening titles.

This is a brilliant and inspiring essay by Cory on the why the copyists—avid consumers who are branded as criminals—are not our enemy. Please read this; it is important for the survival of our culture.

Now you can perform data analysis on the subtitles of the most recent series of Doctor Who, courtesy of the brilliant Matthew Somerville.

From The Magazine : Radar Online : Cory Doctorow imagines a world in which Google is evil

It’s just gone 4am here at Alexandra Palace. There are still plenty of hackers gathered ‘round their laptops, scheming their hacky schemes.

The gaming hack continues apace. Super-smart people are working ‘round the clock to put this together. It’s been a real journey of discovery: a mixture of game theory, APIs and maths. Everyone’s pretty frazzled at this stage though. I think my brain has ceased to function. I blame Tantek.

It probably didn’t help that I stopped to play Werewolf. It wouldn’t be a proper geek gathering without a good round of organised paranoia and suspicion.

It hasn’t bee all keyboard-tapping and accusations of lycanthropy. There was a perfectly judged entertainment break earlier, courtesy of Doctor Who.

Of course it would be completely illegal for somebody to record Doctor Who and play it back to hundreds of people assembled together for Hackday. That would contravene BBC licensing agreements. I’m sure the BBC (and Yahoo) would never do such a thing… officially.

Unofficially, it was a good episode; cheers, Auntie Beeb and Uncle Yahoo.

Former Doctor Who actor Tom Baker is to be the voice of a talking text message service for three months.

Someone Comes to Town, Someone Leaves Town

Cory Doctorow's new novel is out. Buy the dead tree version or download and enjoy, it's your choice.