How To Become A Centaur

Nicky Case on how Douglas Engelbart’s vision for human-computer augmentation has taken a turn from creation to consumption.

When you create a Human+AI team, the hard part isn’t the “AI”. It isn’t even the “Human”.

The transcript of a terrific talk on the humane use of technology.

Instead of using technology to replace people, we should use it to augment ourselves to do things that were previously impossible, to help us make our lives better. That is the sweet spot of our technology. We have to accept human behaviour the way it is, not the way we would wish it to be.

Every now and then, I like to revisit Vannevar Bush’s classic article from the July 1945 edition of the Atlantic Monthly called As We May Think in which he describes a theoretical machine called the memex.

A memex is a device in which an individual stores all his books, records, and communications, and which is mechanized so that it may be consulted with exceeding speed and flexibility. It is an enlarged intimate supplement to his memory.

It consists of a desk, and while it can presumably be operated from a distance, it is primarily the piece of furniture at which he works. On the top are slanting translucent screens, on which material can be projected for convenient reading. There is a keyboard, and sets of buttons and levers. Otherwise it looks like an ordinary desk.

1945! Apart from its analogue rather than digital nature, it’s a remarkably prescient vision. In particular, there’s the idea of “associative trails”:

Wholly new forms of encyclopedias will appear, ready made with a mesh of associative trails running through them, ready to be dropped into the memex and there amplified. The lawyer has at his touch the associated opinions and decisions of his whole experience, and of the experience of friends and authorities.

My legal Memex builds a network of the people and laws available in the public records of politicians and organizations. The infrastructure for this vision relies on open data, free access to law, and instantaneously availability.

As John Sheridan from the UK’s National Archives points out, hypertext is the perfect medium for laws:

Despite the drafter’s best efforts to create a narrative structure that tells a story through the flow of provisions, legislation is intrinsically non-linear content. It positively lends itself to a hypertext based approach. The need for legislation to escape the confines of the printed form predates the all major innovators and innovations in hypertext, from Vannevar Bush’s vision in ” As We May Think“, to Ted Nelson’s coining of the term “hypertext”, through to and Berners-Lee’s breakthrough world wide web. I like to think that Nelson’s concept of transclusion was foreshadowed several decades earlier by the textual amendment (where one Act explicitly alters – inserts, omits or amends – the text of another Act, an approach introduced to UK legislation at the beginning of the 20th century).

That’s from a piece called Deeply Intertwingled Laws. The verb “to intertwingle” was another one of Ted Nelson’s neologisms.

Picture a new American naval recruit in 1945, getting ready to ship out to the pacific to fight against the Japanese. Just as the ship as leaving the harbour, word comes through that the war is over. And so instead of fighting across the islands of the pacific, this young man finds himself in a hut on the Philippines, reading whatever is to hand. There’s a copy of The Atlantic Monthly, the one with an article called As We May Think. The sailor was Douglas Engelbart, and a few years later when he was deciding how he wanted to spend the rest of his life, that article led him to pursue the goal of augmenting human intellect. He gave the mother of all demos, featuring NLS, a working hypermedia system.

Later, thanks to Bill Atkinson, we’d get another system called Hypercard. It was advertised with the motto Freedom to Associate, in an advertising campaign that directly referenced Vannevar Bush.

And now I’m using the World Wide Web, a hypermedia system that takes in the whole planet, to create an associative trail. In this post, I’m linking (without asking anyone for permission) to six different sources, and in doing so, I’m creating a unique associative trail. And because this post has a URL (that won’t change), you are free to take it and make it part of your own associative trail on your digital memex.

A new way to enjoy the mother of all demos, organised into sections that you can jump between. This was put together by Douglas Engelbart’s daughter Christina, and Bret Victor. 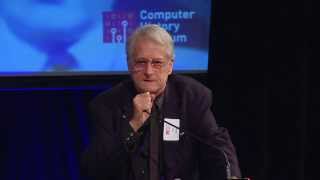 A few words on Doug Engelbart

A beautiful eulogy for Doug Engelbart by Bret Viktor, not celebrating the laundry list of his inventions, but celebrating his intent in making the world a better place.

Engelbart had an intent, a goal, a mission. He stated it clearly and in depth. He intended to augment human intellect. He intended to boost collective intelligence and enable knowledge workers to think in powerful new ways, to collectively solve urgent global problems.