The Great Distractor — Centre for Media, Technology and Democracy

Remember those offshore forts that would get taken over and repurposed as tax/data havens? Well, this is like that …but in space. Half design fiction, and half ponzi scheme, this will give those libertarian seasteaders a run for the money (in a made-up currency, of course).

Orbital Reflector is a sculpture constructed of a lightweight material similar to Mylar. It is housed in a small box-like infrastructure known as a CubeSat and launched into space aboard a rocket. Once in low Earth orbit at a distance of about 350 miles (575 kilometers) from Earth, the CubeSat opens and releases the sculpture, which self-inflates like a balloon. Sunlight reflects onto the sculpture making it visible from Earth with the naked eye — like a slowly moving artificial star as bright as a star in the Big Dipper.

A beautiful sci-fi short from the European Space Agency, inspired by the Rosetta mission.

We can expect even more stunning images like these from Rosetta soon. 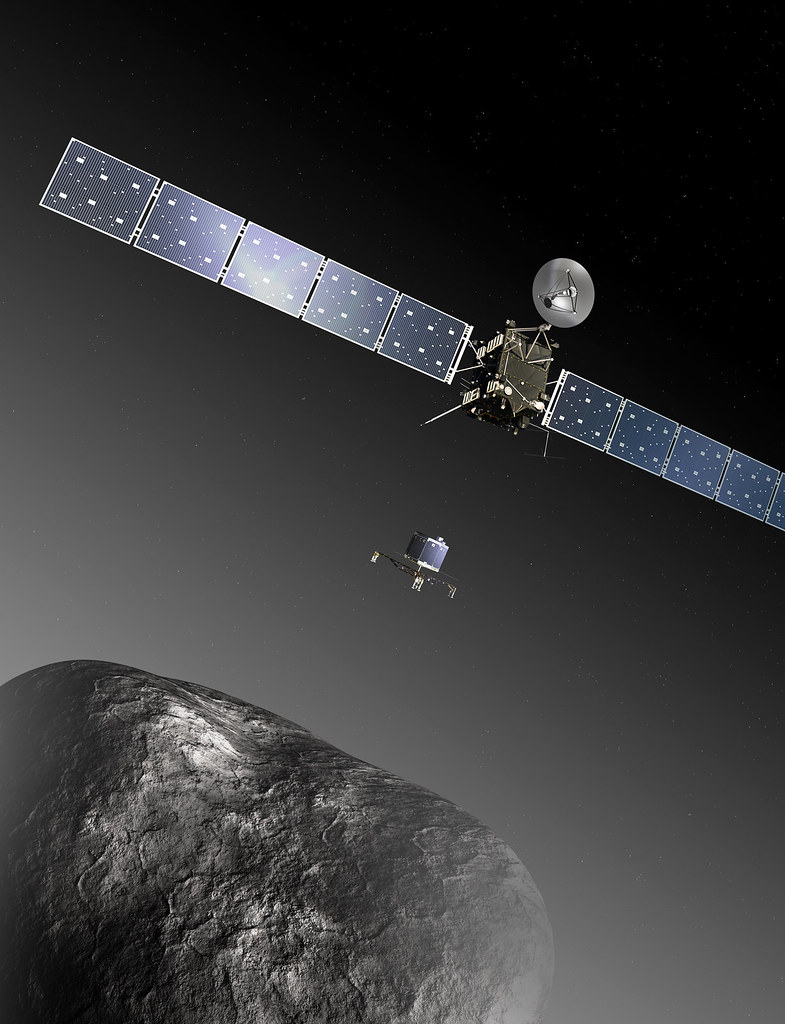 Rhea and Titan, as seen by Cassini.

Those lovely people at Filament Group share some of their techniques for making data tables work across a range of screen sizes.

The weather is glorious right now here in Brighton. As much as I get wanderlust, I’m more than happy to have been here for most of June and for this lovely July thus far.

Prior to the J months, I made a few European sojourns.

Mid-may was Mobilism time in Amsterdam, although it might turn out that this may have been the final year. That would be a real shame: it’s a great conference, and this year’s was no exception.

As usual, I had a lot of fun moderating a panel. This time it was a general “hot topics” panel featuring Remy, Jake, Wilto, and Dan. Smart, opinionated people: just what I want.

Two weeks after Mobilism, I was back on the continent for Beyond Tellerrand in Düsseldorf. I opened up the show with a new talk. It was quite ranty, but I was pleased with how it turned out, and the audience were very receptive. I’ll see about getting the video transcribed so I can publish the full text here.

Alas, I had to miss the second day of the conference so I could down to Porto for this year’s ESAD web talks, where I reprised the talk I had just debuted in Germany. It was my first time in Portugal and I really liked Porto: there’s a lot to explore and discover there.

Two weeks after that, I gave that same talk one last spin at FFWD.pro in Zagreb. I had never been to Croatia before and Jessica and I wanted to make the most of it, so we tagged on a trip to Dubrovnik. That was quite wonderful. It’s filled with tourists these days, but with good reason: it’s a beautiful medieval place.

With that, my little European getaways came to an end (for now). The only other conference I attended was Brighton’s own Ampersand, which was particularly fun this year. The Clearleft conferences just keep getting better and better.

In fact, this year’s Ampersand might have been the best yet. And this year’s UX London was definitely the best yet. I’d love to say that this year’s dConstruct will be the best yet, but given that last year’s was without doubt the best conference I’ve ever been to, that’s going to be quite a tall order.

Still, with this line-up, I reckon it’s going to be pretty darn great …and it will certainly be good fun. So if you haven’t yet done so, grab a ticket now and I’ll see you here in Brighton in September.

SkyCube: The First Satellite Launched by You! by Tim DeBenedictis — Kickstarter

If this Kickstarter project gets launched, it will literally get launched.

scott_lynch: Against Big Bird, The Gods Themselves Contend In Vain

It turns out that Big Bird is a god-defying instantiation of Moorcock’s Eternal Champion. Magnificent!

Big Bird and Snuffy go with him to stand in the Hall of Two Truths at the gate to the afterlife. The gigantic foam balls on these guys! Sure, Elmo loves you, but when’s the last time Elmo held anyone’s hand on the threshold of eternal night?

By playing this canvas game, you can help the European Space Agency plan missions to the planets of our solar system.