Finally. Hyphenation on the web.

Pretty much the only forms of Western literature that don’t use hyphenation are children’s books and websites. Until now.

LocalStorage in use on the Fontdeck Website | Fontdeck Blog

If you’d like to place your cup of tea on one of these lovely Fontdeck coasters, make sure you get a ticket for the Ampersand conference. 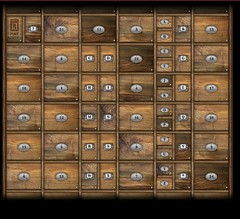 Adfont Calendar 2010 | A free font every day from Fontdeck

It's a type drawer that's also an advent calendar. Responsive too. Check it every day between December 1st and 24th.

Get a glimpse behind Fontdeck's curtain.

The Font-as-Service | i love typography, the typography and fonts blog

Elliot gives a rundown of the font delivery services for the web that are on the way.

Web fonts. Where are we? Will web fonts ever be a reality? | i love typography, the typography and fonts blog

A great round-up on the current state of web typography following TypeCon 2009.