A beautiful real-time visualisation of winds on our planet.

My last shipment from the Quaterly contained everything I need to get a sourdough starter going (thanks to Alexis Madrigal). I think I might have to get me one of these cute sourdough globes: “It’s like a Tamagotchi, but actually alive.”

Be sure to check out the the blog documenting the design and development.

A List Apart: Articles: Responsive Images: How they Almost Worked and What We Need

A terrific article from Wilto detailing the thinking that went into the Boston Globe’s responsive image techniques and how browser pre-caching is now throwing a spanner in the works.

How to Approach a Responsive Design | Upstatement

A great behind-the-scenes look at the process behind the responsive Boston Globe site, with a particular emphasis on the visual and interactive design challenges. 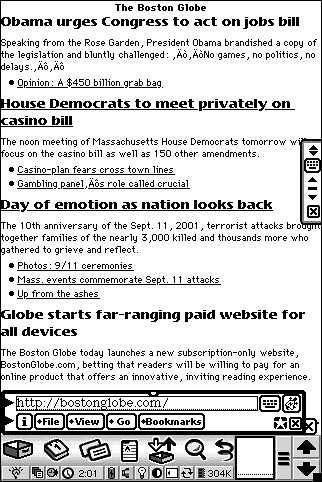 How the Boston Globe Pulled Off HTML5 Responsive Design

I’m sitting here in Nashville with Scott, who has been answering questions from Read Write Web about the Boston Globe launch. Here’s the resulting article.

An overview of the strategy behind the fantastic Boston Globe website.

The technology behind the new BostonGlobe.com on Vimeo

A slick little video that goes behind the scenes of the Boston Globe site.

Ethan chronicles the story of the Boston Globe site and his part in it.

This photograph made my day: the brand new Boston Globe site running on a Newton.

It’s here. A large-scale commercial site with a gorgeous responsive design. Try it on any device.

This is the first of many.

I want one of these for Christmas.