Someone at Clearleft asked me a question recently about making bookmarklets. I have a bit of experience in that department. As well as making a bookmarklet for adding links to my own site, there’s the Huffduffer bookmarklet that’s been chugging away since 2008.

I told them that there are basically two approaches:

When you click the Huffduffer bookmarklet, it pops open this URL:

…with that page parameter filled in with whatever page you currently have open. Let’s say I’ve got this page currently open in my browser:

If I press the Huffduffer bookmarklet, that will spawn a new window with this URL:

I could’ve chosen to get at that information by injecting JavaScript directly into the page open in the browser. But that’s somewhat invasive.

Brian Donohue wrote on Ev’s blog a while back about one of the problems with that approach. Sites that—quite correctly—have a strict Content Security Policy will object to having arbitrary JavaScript injected into their documents.

But remember this only applies to some bookmarklets. If a bookmarklet just spawns a new window—like Huffduffer’s—then there’s no problem. That approach to bookmarklets was dismissed with this justification:

The crux of the issue for bookmarklets is that web authors can control the origin of the JavaScript, network calls, and CSS, all of which are necessary for any non-trivial bookmarklet.

Citation needed. I submit that Huffduffer and Instapaper provide very similar services: “listen later” and “read later”. Both use cases could be described as “non-trivial”. But only one of the bookmarklets works on sites with strict CSPs.

Time and time again, I see over-engineered technical solutions that are built with the justification that “this problem is very complex therefore the solution needs to be complex” (yes, I am talking about web thangs that rely on complex JavaScript). In my experience, it’s exactly the opposite way around. The more complex the problem, the more important it is to solve it in the simplest way possible. It’s the only way of making sure the solution is resilient to unexpected scenarios.

The situation with bookmarklets is a perfect example. It’s not just an issue with strict Content Security Policies either. I’ve seen JavaScript-injecting bookmarklets fail because someone has set their browser cookie preferences to only accept cookies from the originating server.

Bookmarklets are not dead. They may, however, be pining for the fjords. Nobody has a figured out a way to get bookmarklets to work on mobile. Now that might well be a death sentence.

Instapaper is going to add support for fragmentions. Seems like a match made in heaven. 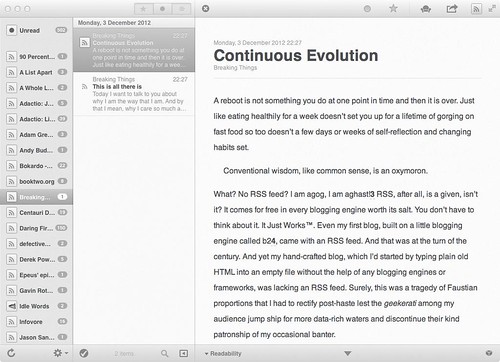 A fascinating explanation of why Instapaper is migrating away from its passwordless sign-up.

I’m off to Copenhagen for Reboot 10. Reboot is always a fun gathering. It might not be the most useful event but as part of a balanced conference diet, it’s got a unique European flavour.

As usual, I’m going to use the opportunity to talk about something a bit different to my usual web development spiels. This time I’ll be talking about The Transmission of Tradition, a subject I’ve already road-tested at BarCamp London 3:

This talk will look at the past, present and future of transmitting traditional Irish music from the dance to the digital, punctuated with some examples of the tunes. This will serve as a starting point for a discussion of ideas such as the public domain, copyright and the emergence of a reputation economy on the Web.

At the very least, it will give me a chance to debut that mandolin I picked up in Nashville.

This will be my third Reboot. My previous talks were:

I recently discovered the video of that last presentation. Jessica was kind enough to transcribe the whole thing. She also transcribed my talk from this year’s XTech. Go ahead and read through them if you have the time.

If you don’t have the time, you can always mark them for later reading using Instapaper. I love that app. It does one simple little thing but does it really well. Hit a bookmarklet labelled “read later” and you’re done.

Maybe I should fire them up in multiple tabs and read them on the flight to Denmark. Or I could spend the time brushing up on my Danish.

If you’re headed to Reboot, I’ll see you there. Otherwise …Farvel!

A nice simple little app for saving URLs to read later. This kind of simplicity is remarkably hard to achieve.