If you make an improvement, it’s not going to be to the industry as a whole — it’ll be specific. And actually improvements have always been specific; it’s just that the industries have since multiplied and narrowed. Inventors once made drops into a puddle, but the puddle then expanded into an ocean. It doesn’t make the drops any less innovative.

A case study from Twitter on the benefits of using a design system:

With component-based design, development becomes an act of composition, rather than constantly reinventing the wheel.

I think that could be boiled down to this:

I just binge-listened to the six episodes of the first season of this podcast from Stephen Fry—it’s excellent!

It covers the history of communication from the emergence of language to the modern day. At first I was worried that it was going to rehash some of the more questionable ideas in the risible Sapiens, but it turned out to be far more like James Gleick’s The Information or Tom Standage’s The Victorian Internet (two of my favourite books on the history of technology).

There’s no annoying sponsorship interruptions and the whole series feels more like an audiobook than a podcast—an audiobook researched, written and read by Stephen Fry!

The terrific talk from Beyond Tellerrand by Claire L. Evans, author of Broad Band.

As we face issues of privacy, identity, and society in a networked world, we have much to learn from these women, who anticipated the Internet’s greatest problems, faced them, and discovered solutions we can still use today.

Gene Wolfe: A Science Fiction Legend on the Future-Altering Technologies We Forgot to Invent | The Polymath Project

We humans are not  good at imagining the future. The future we see ends up looking a lot like the past with a few things tweaked or added on. 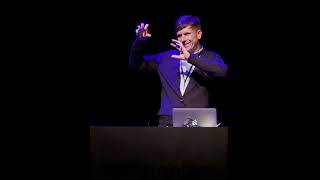 A transcript of the superb talk that Ellen delivered at Patterns Day. So good!

This list has been making the rounds lately. It’s the list of (probably apocryphal) rules underlying the world of Road Runner and Wile E. Coyote. Design principles if you will. Like “The Road Runner cannot harm the Coyote except by going ‘meep, meep’” and “All tools, weapons, or mechanical conveniences must be obtained from the Acme Corporation.”

These are patterns that we are all subconsciously aware of anyway, but there’s something about seeing them enumerated that makes us go “oh, yeah” in recognition.

This reminds me of a silly idea I had when I was younger. It’s about Star Wars (of course). Specifically it’s about a possible rule—or design principle—underlying the kitbashed used-universe design of that galaxy far, far away.

Now I know this is going to sound crazy, but hear me out…

What if the wheel has never been invented in the world of Star Wars?

It’s probably not a deliberate omission, but we never actually see a single wheel in the original trilogy (the prequels, as always, are another matter entirely). Sure, there are wheels implied under the imperial mouse droid or under R2-D2’s legs but you never actually see them. Even the sandcrawler, which uses tracks, hides its internal workings.

Instead, this is a universe where everything travels via some kind of maglev antigravity even when it seems completely unnecessary—couldn’t you just slap a carbonite Han Solo on a gurney? Whenever a spaceship extends its landing gear we see …skids. Always skids. Never wheels. And what kind of mechanical engineer would actually design something like an AT-AT if it weren’t for a prohibition on wheels?

I know you’re probably thinking “this is so stupid”, but I bet you’re also trying to think of an explicit instance of a wheel in the original trilogy. You may also be feeling a growing urge to watch the films again. And whenever you do end up watching the trilogy again, and you find yourself looking at the undercarriage of every vehicle, you’ll realise that I’ve planted this idea Inception-like in your head.

Anyway, like I said, the prequels put paid to my little theory. I was genuinely disappointed when those droidekas rolled down that corridor. Remember that feeling of “oh, please!” when R2-D2 used his thrusters to fly in Attack Of The Clones? You felt cheated, right? The film was breaking the rules of its own universe. Well, a little part of me felt that way when my silly theory was squashed.

But just go with it here for a minute. Suppose the wheel had never been invented. Would it be possible for a space-faring civilisation to evolve? It’s generally assumed that you’d need to at least invent fire to achieve any kind of mechanical advances, but what about the wheel?

Imagine if George Lucas had actually been playing a design fiction long con. My younger self liked to imagine that lists of instructions were passed around ILM, along the same lines as those Road Runner rules. And one of those instructions would’ve been the cryptic injunction against showing wheels in any vehicle designs. Then imagine what it would have been like if, decades later, Lucas casually dropped the bombshell that the wheel was never invented in this galaxy far, far away. It would’ve blown. Our. Minds.

Ah, but it was just a dream. A crazy, apopheniac dream.

The Hummingbird Effect — How We Got to Now