Empty Pointers and Constellations of AI

AI becomes a stand-in term for whatever technologies and techniques are new, shiny, and just beyond the grasp of our understanding. We use it to gesture at a future we cannot fully comprehend or currently realise. As soon as we do, it will no longer be “AI.”

article vs. section: How To Choose The Right One — Smashing Magazine

I really, really enjoyed this deep dive into practical HTML semantics. Sit back and enjoy!

The right tag for the job: why you should use semantic HTML - localghost

Using semantic HTML as building blocks for a website will give you a lovely accessible foundation upon which to add your fancy CSS and whizzy JavaScript.

The quest for more is a kind of prison that we make for ourselves. The idea that if we work ourselves to the bone now we can live a better life later is a convenient lie that we’ve been conditioned to tell ourselves.

I see decentralization as a way to lead to a more equitable society through disassembling existing hierarchies, for example, but I see straight through the people who see these ideas as a way to build a new hierarchy for their own benefit. We used to talk about abolishing gatekeepers in the early days of the web, too, until it became clear that many people just wanted to become a new kind of gatekeeper themselves.

Remote to who? A working letter

The idea that your job should be the primary source of meaning in your life is an elaborately made trap, propped up across industries, designed to make you a loyal worker who uses the bulk of their intellectual and creative capacity to further their own career.

Design ops on the Clearleft podcast

This week’s episode is all about design ops. I began contructing the episode by gathering raw material from talks at Leading Design. There’s good stuff from Kim Fellman, Jacqui Frey, Courtney Kaplan, and Meredith Black.

But as I was putting the snippets together, I felt like the episode was missing something. It needed a bit of oomph. So I harangued Andy for some of his time. I wasn’t just fishing for spicy hot takes—something that Andy is known for. Andy is also the right person to explain design ops. If you search for that term, one of the first results you’ll get is a post he wrote on the Clearleft blog a few years back called Design Ops — A New Discipline.

I remember helping Andy edit that post and I distinctly recall my feedback. The initial post didn’t have a definition of the term, and I felt that a definition was necessary (and Andy added one to the post).

My cluenessness about the meaning of terms like “design ops” or “service design” isn’t some schtick I’m putting on for the benefit of the podcast. I’m genuinely trying to understand these terms better. I don’t like the feeling of hearing a term being used a lot without a clear understanding of what that term means. All too often my understanding feels more like “I think I know it means, but I’m not sure I could describe it.” I’m not comfortable with that.

Making podcast episodes on these topics—which are outside my comfort zone—has been really helpful. I now feel like I have a much better understanding of service design, design ops and other topical terms. I hope that the podcast will be just as helpful for listeners who feel as bamboozled as I do.

The secret of design being useful in many places is not talking about design too much and just getting on with it. I sometimes think we create significant language barriers with job titles, design theory and making people learn a new language for the privilege of working with us.

I think there’s some truth to that. Andy disagrees. Strongly.

In our chat, Andy and I had what politicians would describe as “a robust discussion.” I certainly got some great material for the podcast (though some of the more contentious bits remain on the cutting room floor).

Calling on Andy for this episode was definitely the right call. I definitely got the added oomph I was looking for. In fact, this ended up being one of my favourite episodes.

There’s a lot of snappy editing, all in service of crafting a compelling narrative. First, there’s the origin story of design ops. Then there’s an explanation of what it entails. From around the 13 minute mark, there’s a pivot—via design systems—into asking whether introducing a new term is exclusionary. That’s when the sparks start to fly. Finally, I pull it back to talking about how Clearleft can help in providing design ops as a service.

The whole episode comes out at 21 minutes, which feels just right to me.

I’m really pleased with how this episode turned out, and I hope you’ll like it too. Have a listen and decide for yourself.

The transcript of David Heinemeier Hansson keynote from last year’s RailsConf is well worth reading. It’s ostensibily about open source software but it delves into much larger questions.

Don’t quit your day job: the benefits of being a ‘bifurcator’ | Aeon Essays

Here, then, is my speculation. Work is something we struggle to get and strive to keep. We love-hate it (usually not in equal measure). Sometimes it seems meaningless. I’m told this is the case even for surgeons, teachers and disaster-relief workers: those with jobs whose worth seems indisputable. For the mere facilitators, the obscure cogs in the machinery of the modern economy whose precise function and value it takes some effort to ascertain, the meaning in what we do often seems particularly elusive (I should know). I contend, however, that while our lives need to be meaningful, our work does not; it only has to be honest and useful. And if someone is voluntarily paying you to do something, it’s probably useful at least to them.

Converting the analog into the digital requires discretization, leaving things out. What we filter out—or what we focus on—depends on our biases. How do conventional translators handle issues of bias? What can programmers learn from them?

When in doubt, label your icons.

When not in doubt, you probably should be.

“It turns out” « the jsomers.net blog

It turns out that “it turns out” is a handy linguistic shortcut for making an unsubstaniated assertion.

A short text file, imbued with meaning and memory.

How do you mark up an accordion? — Sara Soueidan

I love this deep dive that Sara takes into the question of marking up content for progressive disclosure. It reminds me Dan’s SimpleQuiz from back in the day.

Then there’s this gem, which I think is a terrificly succinct explanation of the importance of meaningful markup:

It’s always necessary, in my opinion, to consider what content would render and look like in foreign environments, or in environments that are not controlled by our own styles and scripts. Writing semantic HTML is the first step in achieving truly resilient Web sites and applications.

I love, love, love all the little details of HTML that Aaron offers up here. And I really like how he positions non-visual user-agents like searchbots, screen readers, and voice assisants as headless UIs.

HTML is a truly robust and expressive language that is often overlooked and undervalued, but it has the incredible potential to nurture conversations with our users without requiring a lot of effort on our part. Simply taking the time to code web pages well will enable our sites to speak to our customers like they speak to each other. Thinking about how our sites are experienced as headless interfaces now will set the stage for more natural interactions between the real world and the digital one.

I encourage you to think about and make sure you are using the right elements at the right time. Sometimes I overthink this, but that’s because it’s that important to me - I want to make sure that the markup I use helps people understand the content, and doesn’t hinder them.

A better metaphor for technology - The Verge

The ideas and images that come to mind when you think of technology as an instrument are more useful than if you think of it as a tool. Instruments — I’m specifically talking about musical instruments — are a way to create culture.

You approach instruments with a set of expectations and associations that are more humane. It’s built into their very purpose. Instruments are meant to make something for other people, not making things. When you use an instrument, you have an expectation that it is going to take effort to use it well. Using an instrument takes practice. You form a relationship with that object. It becomes part of your identity that you make something with it. You tune it. You understand that there’s no such thing as a “best” guitar in the same way that there’s not necessarily a “best” phone.

“What does that funny squiggle mean?” Playlist - BBC Ideas

“The Only-ness Statement,” an article by Dan Mall

I’ve been to four conferences in two weeks. I wasn’t speaking at any of them so I was able to relax and enjoy the talks.

There was UX Brighton on November 3rd, featuring a terrific opening keynote from Boxman. 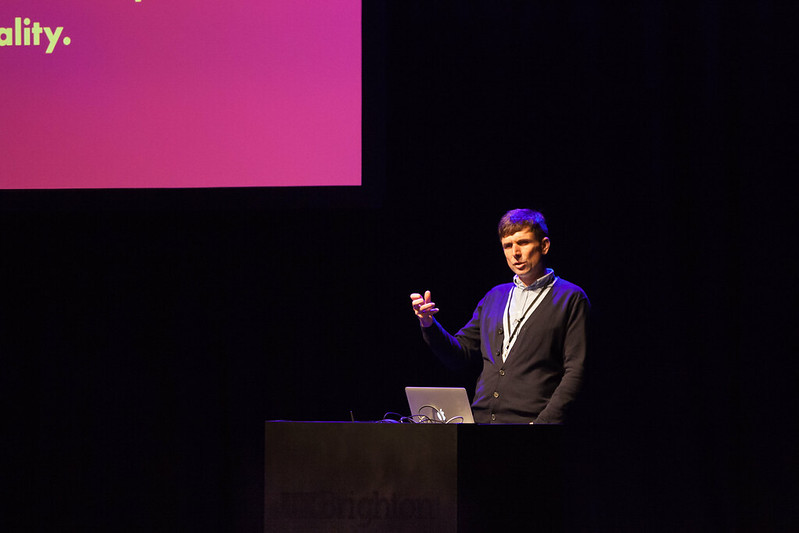 One week later, I was in the Duke of York’s cinema for FFConf along with all the other Clearleft frontend devs—it’s always a thought-provoking day out. 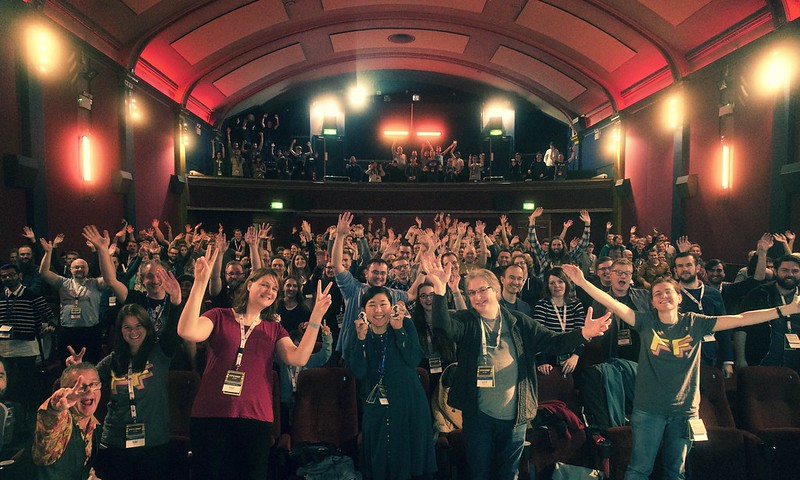 Yesterday, I went to Meaning in the daytime, and Bytes in the evening. 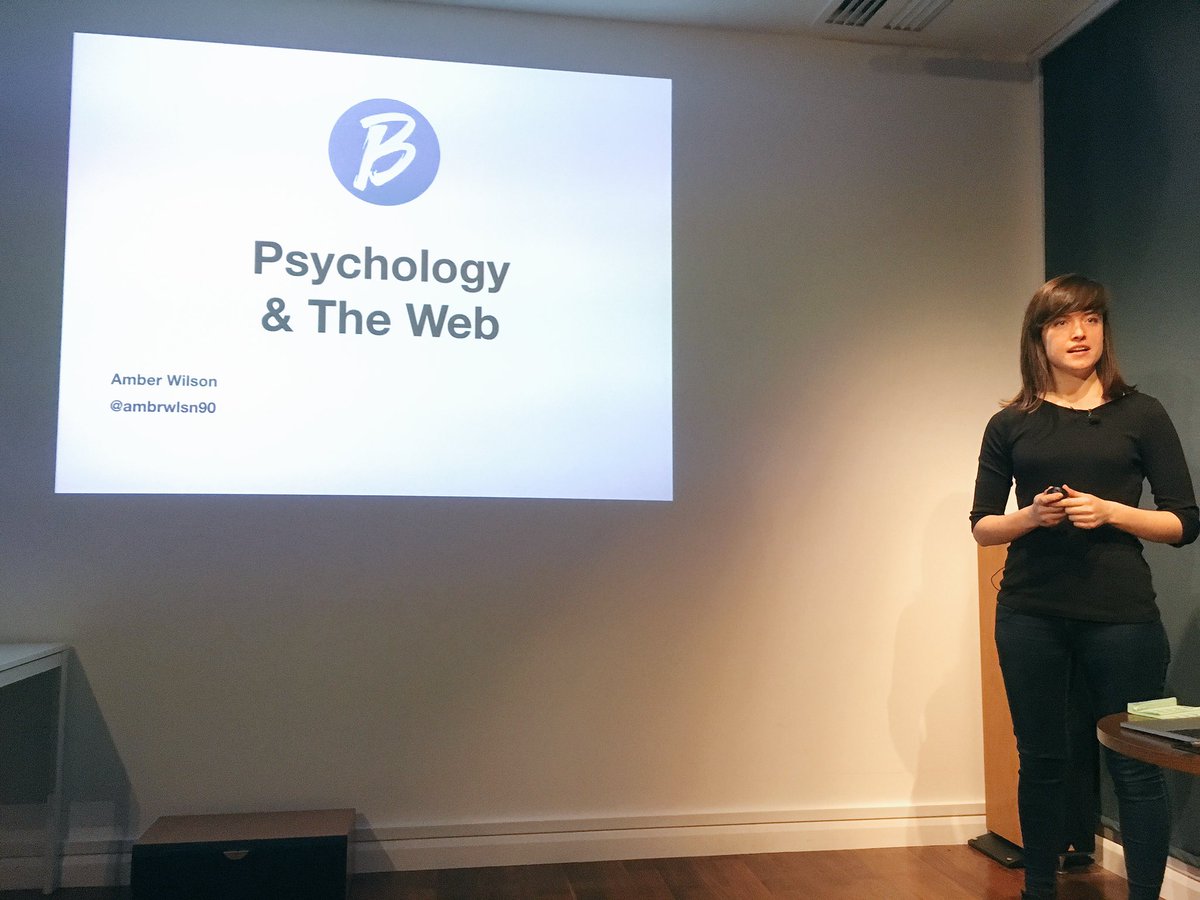 Every one of those events was in Brighton. That’s pretty good going for a town this size …and that’s not even counting the regular events like Async, Codebar, and Ladies That UX.