The Future History of the Nuclear Renaissance With Isabelle Boemeke

I really like the format of this bit of journo-fiction. An interview from the future looking back at the turning point of today.

It probably helps that I’m into nuclearpunk just as much as solarpunk, so I approve this message.

The latest episode of Ariel’s excellent Offworld video series (and podcast) is all about Close Encounters Of The Third Kind.

I have such fondness for this film. It’s one of those films that I love to watch on a Sunday afternoon (though that’s true of so many Spielberg films—Jaws, Raiders Of The Lost Ark, E.T.). I remember seeing it in the cinema—this would’ve been the special edition re-release—and feeling the seat under me quake with the rumbling of the musical exchange during the film’s climax.

Ariel invited Rose Eveleth and Laura Welcher on to discuss the film. They spent a lot of time discussing the depiction of first contact communication—Arrival being the other landmark film on this topic.

This is a timely discussion. There’s a new book by Daniel Oberhaus published by MIT Press called Extraterrestrial Languages:

If we send a message into space, will extraterrestrial beings receive it? Will they understand?

You can a read an article by the author on The Guardian, where he mentions some of the wilder ideas about transmitting signals to aliens:

Minsky, widely regarded as the father of AI, suggested it would be best to send a cat as our extraterrestrial delegate.

Don’t worry. Marvin Minsky wasn’t talking about sending a real live cat. Rather, we transmit instructions for building a computer and then we can transmit information as software. Software about, say, cats.

It’s not that far removed from what happened with the Voyager golden record, although that relied on analogue technology—the phonograph—and sent the message pre-compiled on hardware; a much slower transmission rate than radio.

But it’s interesting to me that Minsky specifically mentioned cats. There’s another long-term communication puzzle that has a cat connection.

The Yukka Mountain nuclear waste repository is supposed to store nuclear waste for 10,000 years. How do we warn our descendants to stay away? We can’t use language. We probably can’t even use symbols; they’re too culturally specific. A think tank called the Human Interference Task Force was convened to agree on the message to be conveyed:

This place is a message… and part of a system of messages… pay attention to it! Sending this message was important to us. We considered ourselves to be a powerful culture.

This place is not a place of honor…no highly esteemed deed is commemorated here… nothing valued is here.

What is here is dangerous and repulsive to us. This message is a warning about danger.

A series of thorn-like threatening earthworks was deemed the most feasible solution. But there was another proposal that took a two pronged approach with genetics and folklore:

This is the raycat solution.

Robert McFarlane’s new book is an exploration of deep time. In this extract, he visits the Onkalo nuclear waste storage facility in Finland.

What would happen if a nuclear bomb went off in your backyard? | Outrider

Hot nuclear blasts in your area.

The Other 10,000 Year Project: Long-Term Thinking and Nuclear Waste — Blog of the Long Now

An even thornier problem than the Clock of the Long Now.

A website dedicated to one of the most, um, interesting solutions to the Yucca Mountain nuclear waste storage problem:

The Okinawa missiles of October | Bulletin of the Atomic Scientists

Pssst! Wanna read something scary for Halloween? Well, this should make you shit your pants.

Seriously though, if the event described here turn out to be true, it is one of the most frightening moments in the history of our species.

The creation of Missile Command and the haunting of its creator, Dave Theurer

The story behind the classic arcade game Missile Command and the toll it took on its creator:

Theurer’s constant strides for perfection left him working his body to the point that Missile Command’s premise started to manifest itself in his subconscious, sneaking into his dreams and turning them to nightmares.

There was something about the sound of those explosions, the feeling of the trackball in your hand, and the realisation that no matter how well you played, you could only delay the inevitable.

A fascinating blog documenting the secrecy around nuclear weaponry, past and present, by Alex Wellerstein of the American Institue of Physics.

This cold-war era soviet manual for post-nuclear life is as fascinating as it is horrifying.

A beautiful and disturbing piece of data visualisation. The numbers are quite astonishing. 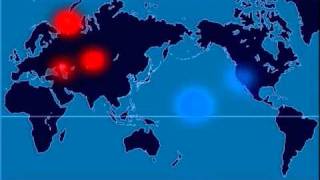 This Place is Not a Place of Honor on Vimeo

A demo reel for the proposed solution to a very, very, very long term problem.

Damn Interesting • This Place is Not a Place of Honor

Trying to design a warning message for future generations, without relying on language, writing or current semiotics.

We considered ourselves to be a powerful culture. This place is not a place of honor…no highly esteemed deed is commemorated here… nothing valued is here. What is here is dangerous and repulsive to us.

"Now, there are signs â€œRADIOACTIVITYâ€� written with big white letters on the approaching paths to the structure but they donâ€™t stop the abandoned exotics lovers."