Exactly what it sounds like: a checklist of measures you can take to protect yourself.

Most of these require a certain level of tech-savviness, which is a real shame. On the other hand, some of them are entirely about awareness.

‘Never assume anything’: The golden rules for inclusive design

Inclusive design is also future-proofing technology for everyone. Swan noted that many more developers and designers are considering accessibility issues as they age and encounter poor eyesight or other impairments.

I’ve been wondering about this for quite a while: surely demanding specific patterns in a password (e.g. can’t be all lowercase, must include at least one number, etc.) makes it easier to crack them, right? I mean, you’re basically providing a ruleset for brute-forcing.

When employees are faced with this requirement, they tend to:

If we know that is a common pattern, then we know where to start…

The answers to these questions about forms are useful for just about any website:

And here’s another reason why password rules are bullshit: you’re basically giving a list of instructions to hackers—the password rules help them narrow down the strings they need to brute force.

Ever been on one of those websites that doesn’t allow you to paste into the password field? Frustrating, isn’t it? (Especially if you use a password manager.)

It turns out that nobody knows how this ever started. It’s like a cargo cult without any cargo.

This is a wonderful service! Handcrafted artisanal passwords made with a tried and trusted technique:

You roll a die 5 times and write down each number. Then you look up the resulting five-digit number in the Diceware dictionary, which contains a numbered list of short words.

That’s the description from the site’s creator, Mira:

Please keep in mind when ordering that I am a full-time sixth grade student with a lot of homework.

She’s the daughter of Julia Angwin, author of Dragnet Nation.

A great investigation into the usability benefits of allowing users to fill in their passwords in plain text.

Major caveat: make sure you still offer the ability to mask passwords too.

Luke continues to tilt against the windmills of the security theatre inertia that still has us hiding passwords by default. As ever, he’s got the data to back up his findings.

The Secret Life of Passwords - NYTimes.com

A fascinating look at how the humble password gets imbued with incredible levels of meaning.

It reminds me of something I heard Ze Frank say last year: “People fill up the cracks with intimacy.”

A description of the shockingly cavalier attitude that Chrome takes with saved passwords:

Today, go up to somebody non-technical. Ask to borrow their computer. Visit chrome://settings/passwords and click “show” on a few of the rows. See what they have to say.

I concur completely with Luke’s assessment here. Most password-masking on the web is just security theatre. Displaying password inputs by default (but with an option to hide) should be the norm.

I like this passwordless log in pattern but only for specific use cases: when you know that the user has access to email, and when you don’t expect repeat “snacking” visits throughout the day.

The Perpetual, Invisible Window Into Your Gmail Inbox - Waxy.org

Andy sounds a cautionary note: the password anti-pattern may be dying, but OAuth permission-granting shouldn’t be blasé. This is why granular permissions are so important.

Dana has put together an excellent grab-bag of data on people’s password habits.

A fascinating explanation of why Instapaper is migrating away from its passwordless sign-up.

Two months ago, I called Twitter out on their insistence that developers use OAuth when authorising with Twitter while they themselves continued to use the password anti-pattern when they wanted to peek into third-party address books.

I’m happy to report that Twitter have since fixed this. If you go to the Find Friends portion of the “Who To Follow” section, you’ll now be greeted with links that lead to correct authentication with LinkedIn, Gmail, Yahoo and Hotmail.

The OAuthcalypse is upon us. Since August 31st, all third-party Twitter services must use OAuth to authenticate. This is a good thing; a very good thing. Before that date, services were allowed to use the password anti-pattern to log you in.

Twitter has put its foot down and declared that the password anti-pattern will no longer be tolerated. Hurrah!

What a shame then, that Twitter is being utterly hypocritical. On their Find Friends page, they encourage you to:

Scan your email address book or contacts to discover which of your friends are already using Twitter.

They do this using the password anti-pattern. You are asked for your Gmail password even though the Google Contacts API would allow Twitter to connect to Gmail using proper authentication …exactly what Twitter is insisting third-parties use when they want to access Twitter’s data.

Twitter asks for AOL passwords (now there’s an audience that we shouldn’t be teaching to give their passwords away) but even AOL has an API with proper authentication.

Twitter does connect to LinkedIn correctly. That’s one out of four.

There are two solutions to this state of affairs. Either Twitter decides to do the right thing and switch over to using APIs and authentication for Gmail, Yahoo and AOL …or else Gmail, Yahoo and AOL follow Twitter’s example and disallow the password anti-pattern for scraping address books.

Twitter should not be encouraging Gmail users, Yahoo users and AOL users to divulge their passwords but at the same time, Gmail, Yahoo and AOL should be taking steps to ensure that such profligate behaviour is not rewarded.

Update: There are some very encouraging responses from Twitter. Ryan Sarver says:

yes - great points and something we hope to migrate very soon

A few months ago, Jakob Nielsen wrote about passwords. Specifically, he wrote about the standard practice of the contents of password fields being masked by default. In his typical black/white, on/off, right/wrong Boolean worldview, Father Jakob called for this practice to be abolished completely.

Meanwhile, back in the real world, Apple take a more empathetic approach, acknowledging that there often very good reasons for masking passwords. But that doesn’t mean you can’t offer the user the option to disable password masking if they choose.

This pattern came up in a conversation at Clearleft recently. We were discussing a sign-up process, trying to avoid the nasty pattern of asking users to input the same value twice. We were all in agreement that Apple’s solution to password masking was pretty elegant.

I’d like to use this pattern on the sign up form for Huffduffer but I can’t see a way of easily integrating it with the Mad Libs approach. But I have implemented this option on the log-in form. 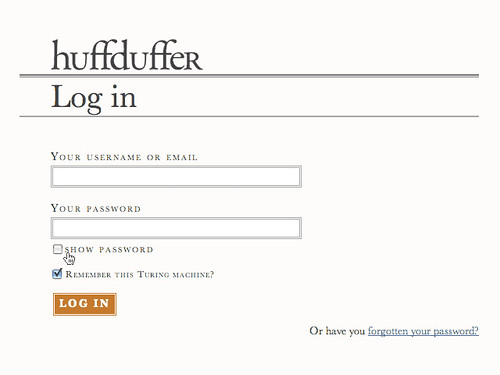 Here’s what’s happening under the hood:

It would have been a lot simpler to just use JavaScript to toggle the type attribute of one field between “password” and “text”. But, in a certain browser that shall remain nameless, you can’t do that …for very sound security reasons, no doubt.

So the script isn’t as elegant as I’d wish but it gets the job done. Feel free to view source on the JavaScript.

Update: Jonathan Holst points me to a post by Jeff Atwood on this subject. It’s worth reading just to boggle at the insanity of Lotus Notes’ security features. From the comments there, I found a bookmarklet to reveal password characters.