Today was another day of excellent perambulations around Philadelphia. This time Jessica and I went to the Italian market featured so heavily in Rocky. Then we wandered up to Reading Terminal Market and took in the tastes and smells. Who knew the Amish made such good doughnuts?

But the main event of this day, this week, and indeed, this month, was the PPC: Philly Pizza Club. This involves the consumption of pizza and many varieties of beer.

The beer was necessary because the other the portion of PPC is the entertainment. And I use the term loosely. This evening’s “entertainment” was the classic 1987 film Miami Connection.

It was the best crossover ’80s rock ninja movie I’ve ever seen.

Jessica and I spent today in full-on tourist mode in Philadelphia, walking its streets and exploring its rich heritage.

Philadelphia, home to the Liberty Bell and the American constitution; the city where the founding fathers toiled at their work, forging a revolution and a country; home to the country’s first library and its first bank; in many ways, the birthplace of the modern world.

Yeah, yeah, yeah. Whatever. Here’s the important part: today I had my first ever Philly cheesesteak.

Every Philadelphian has a very strong opinion about where the best cheesesteak in the city is to be had, and we went with a highly-recommended, very popular spot: Jim’s. There was a line out the door. This is a daily occurrence. 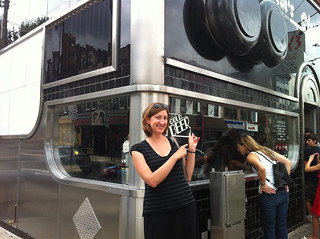 When you eventually get to the point of ordering, you are strongly encouraged to quickly and clearly state your cheese choice and onion preference (a Boolean value). Then you pay. Then you find a seat, if you’re lucky. Then you eat. 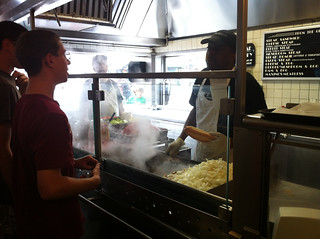 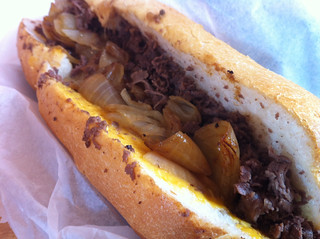 On the recommendation of the internet, I went with the cheese wiz option. Technically, I’m not even sure if it’s actually a cheese. But boy, it sure works a treat in combination with the delicious beef and onions. The cheese wiz acted as a mayonnaise-like lubricant as well as a flavour ingredient. All in all, it was absolutely superb. If all cheesesteaks are this good, I can understand this city’s pride in—and obsession with—its contribution to the sandwich world.

After that we wandered around and took in the sights until it was time to meet up with Jenn and Sutter for a beer at sunset while watching an infinite supply of joggers run up the Rocky steps and raise their arms in the air at the summit.

This morning, Jessica and I left Alexandria, but not by plane. No, we travelled by a more elegant transport from a more civilised age. We took the train. In just a few short, fairly comfortable wifi-assisted hours, we arrived in Philadelphia.

Ah, Philadelphia! It’s my first time in the city of brotherly love, though of course I’ve seen it depicted in many films. Why, the very train station we arrived at was the scene of the opening murder in Witness. Then there’s Rocky, Mannequin, National Treasure, everything ever made by M. Knight Shyamalan, and of course, Philadelphia.

Jenn showed us around her neighbourhood, and we grabbed a coffee at a suitably hipsterish café where the music was either from the 80s or completely new but heavily inspired by the 80s.

The plan for the evening was to go to a baseball game. When in Rome. But alas, the weather was too treacherous to trust so we went to a bar and participated in a pub quiz instead, ably assisted by the internet’s Kevin Cornell.

During the course of the quizzical proceedings, we all partook in a round of picklebacks. Jenn had previously familiarised me with the concept. A pickleback consists of a shot of Irish whiskey followed by a shot of pickle juice. The theory is that the pickle juice completely erases any trace of the whiskey you’ve just knocked back. I, however, was very sceptical of the whole idea. It just sounded disgusting to me. I mean, Irish whiskey? Really? Ugh!

The pickle juice, on the other hand, was delicious.

Eric and Jeffrey are going to the city of brotherly love.