In what is quite likely the greatest, most poetic showdown since the Thrilla in Manila, Brighton and Hove of the United Kingdom beat Portland of the USA by one-thousandth of a point. Portland scored 8.1631, Brighton scored 8.1632. No really. Brighton is scientifically the most hipster city in the world. Just.

I spoke at Responsive Field Day here in Portland on Friday. It was an excellent event. All the talks were top notch.

The day flew by, with each talk clocking in at just 20 minutes, in batches of three followed by a quick panel discussion. It was a great format …but I knew it would be. See, Responsive Field Day was basically Responsive Day Out relocated to Portland.

Jason told me last year how inspired he was by the podcast recordings from Responsive Day Out and how much he and Lyza wanted to do a Responsive Day Out in Portland. I said “Go for it!” although I advised changing to the name to something a bit more American (having a “day out” at the seaside feels very British—a “field day” works perfectly as the US equivalent). Well, Jason, Lyza, and everyone at Cloud Four should feel very proud of their Responsive Field Day—it was wonderful.

As the day unfolded on Friday, I found myself being quite moved. It was genuinely touching to see my conference template replicated not only in format, but also in spirit. It was affordable (“Every expense spared!” was my motto), inclusive, diverse, and fast-paced. It was a lovely, lovely feeling to think that I had, in some small way, provided some inspiration for such a great event.

Jessica pointed out that isn’t the first time I’ve set up an event template for others to follow. When I organised the first Science Hack Day in London a few years ago, I never could have predicted how amazingly far Ariel would take the event. Fifty Science Hack Days in multiple countries—fifty! I am in awe of Ariel’s dedication. And every time I see pictures or video from a Science Hack Day in some far-flung location I’ve never been to, and I see the logo festooning the venue …I get such a warm fuzzy glow.

Y’know, when you’re making something—whether it’s an event, a website, a book, or anything else—it’s hard to imagine what kind of lifespan it might have. It’s probably just as well. I think it would be paralysing and overwhelming to even contemplate in advance. But in retrospect …it sure feels nice.

I was so close to bringing my ancient copy of DOM Scripting to @rfdpdx for @adactio to sign.

Aw, this is so sweet! Jason describes getting inspired by Responsive Day Out to create Responsive Field Day:

For the last two years, I’ve devoured the podcasts from Responsive Day Out—the conference that Jeremy Keith and Clearleft put on across the pond in Brighton.

I’ve encouraged anyone who would listen to subscribe to the podcast. It is my favorite conference that I’ve never been to.

Inspired by Responsive Day Out, the gang at Cloud Four are organising a one-day event on responsive design in Portland on September 25th. It’s gonna be a good one.

It seems like just a fortnight ago that I was in the States for An Event Apart Atlanta. Wait a minute …it was just a fortnight ago! It would be utter madness, then, for me to willingly make another trip across the Atlantic so soon after that. And yet, that’s exactly what I did for Indie Web Camp.

Now, admittedly, the fact that the event was taking place in Portland may have swayed my decision; it’s a place I’m very fond of, filled as it is with good coffee, a giant bookshop, food carts and excellent geeks most dear to my heart. But the premise of Indie Web Camp also tugged heavily at my heartstrings: the desire to have control over my my own data—living at my own URL—syndicated out to third-party sites …the Pembertonisation of personal publishing. I knew that if I didn’t attend this event, I would just be miserable watching Twitter posts from a timezone eight hours away. So I made the trip from England to the Pacific Northwest to spend two days in the company of some very, very smart people.

I wasn’t sure whether it was going to be like a Barcamp or more like a hack day. In the end, it was the perfect mixture of both. The first day was spent brainstorming ideas. The second day was spent coding.

I feel bad that I didn’t contribute more to the coding side of things (especially after travelling so far to be there) but I did at least take some notes on the demos presented at the end of the event.

There were some fascinating themes throughout. Chris spoke about the possibilities of distributed web intents and the possibility of hijacking proprietary actions—such as Facebook’s “like” and Google’s “+1”—through a browser plug-in. On the subject of browser plug-ins, Glenn blew everyone’s minds with a demo of the latest Firefox extension he’s been working on. It more or less turns the browser into an artificially intelligent user agent. I hope there’ll be some documentation forthcoming soon.

Ward Cunningham—yes, that Ward Cunningham—spearheaded an initiative for creating a distributed wiki. Meanwhile, a whole bunch of us were concerned about how much pictorial data we are entrusting to Flickr, a service owned by Yahoo; a company with a dreadful track record for preserving personal publishing (Geocities—never forget, never forgive). There was much brainstorming and coding around backing up Flickr photos as well as figuring out ways to post to Flickr from your own website.

I should have been contributing to that but instead I was getting some valuable Github advice from Shane on how to contribute to No More Sharecropping. Check out the README file if you’d also like to contribute.

All in all, it was a great gathering, ably organised by Tantek, Amber, Aaron and Crystal …well worth the trip. 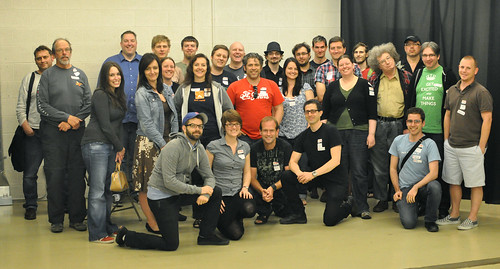 Susan’s comprehensive notes from the roundtable discussion about the mythical mobile user.

It’s been a starwarsy few days.

I made the most of my brief time in Seattle with a visit the Star Wars exhibit at the Pacific Science Center. I took many photos. Needless to say, I loved it, particularly the robot show’n’tell that intermixed fictional droids like C3PO with automata from our own timeline like Kismet. The premise of the exhibition was to essentially treat Star Wars as a work of design fiction.

From Seattle, Jessica and I took the train down to Portland. No, it didn’t go under the ocean like the Eurostar, and having WiFi on board a train wasn’t quite as thrilling as having WiFi on a plane, but it was still a lovely journey through some beautiful scenery. Do not pass Go. Do not get groped by the TSA.

Portland turns out to be delightful, just as reports suggested. There are food carts a-plenty. There’s a ma-HOO-sive book shop. There’s excellent coffee. And then there’s the beer. From Wikipedia:

With 46 microbrew outlets, Portland has more breweries and brewpubs per capita than any other city in the United States.

Amongst the many, many machines packed into the place was the original Star Wars arcade game. Just seeing it brought back a Proustian rush of memories. I had to play it. I remembered a not-so-secret tactic that results in a nice big bonus…

When you get to the trench level on the Death Star, don’t fire; instead dodge and weave to avoid the incoming fire. After about thirty seconds, the music stops. You are now using the Force. If you fire just one single shot into the exhaust port at the end of the trench, you will be rewarded with many, many bonus points.

I’ve been back in Brighton for just a couple of days and now I’m about to embark on a fairly lengthy trip away to the States.

I’m going there for Drupalcon. I’ll be leading an HTML5 workshop on Monday. I’d love to try to Abe Froman my way into the Web Science Workshop the day before, but I’ll probably be too busy finding somewhere to print off workshop materials (a service the conference organisers are unwilling to provide …it’s like the opposite of how Sophie runs UX London).

Right about the time that Drupalcon is wrapping up, I’ll head down to Austin for the annual geek pilgrimage to South By Southwest Interactive. I should really pay close attention Tantek’s SXSW packing and check list.

This year, I’m not giving a presentation or speaking on a panel so I can relax and enjoy myself. If you’re heading to Southby, I look forward to sharing a Shiner Bock or three—one of the reasons I like going is not just to see people I haven’t seen in ages, but also to meet new people who equally geeky about the web.

After the craziness of Austin, I’m going to unwind for a while with the in-laws down in Saint Augustine, Florida, which should be nice and relaxing.

After that, I’m off to Portland, Oregon; a place to which I’ve never been but about which I’ve heard plenty of good things. There’s geek meet up planned for March 24th. Come along for a beer and a chat.

Finally, I’ll finish up in Seattle for the first Event Apart of the year. I have no doubt that the conference will be excellent, as usual. I just hope that the presentation I’ve got planned can meet the high standards set by the other speakers.

If you’re going to be in any of those places—Chicago, Austin, Saint Augustine, Portland, or Seattle—I look forward to seeing you there.