Here’s the opening keynote I gave at the Render Conference in Oxford. The talk is called Evaluating Technology:

We work with technology every day. And every day it seems like there’s more and more technology to understand: graphic design tools, build tools, frameworks and libraries, not to mention new HTML, CSS and JavaScript features landing in browsers. How should we best choose which technologies to invest our time in? When we decide to weigh up the technology choices that confront us, what are the best criteria for doing that? This talk will help you evaluate tools and technologies in a way that best benefits the people who use the websites that we are designing and developing. Let’s take a look at some of the hottest new web technologies and together we will dig beneath the hype to find out whether they will really change life on the web for the better. 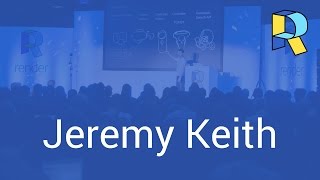 This year’s Render conference just wrapped up in Oxford. It was a well-run, well-curated event, right up my alley: two days of a single track of design and development talks (see also: An Event Apart and Smashing Conference for other events in this mold that get it right).

One of my favourite talks was from Frances Ng. She gave a thoroughly entertaining account of her journey from aerospace engineer to front-end engineer, filled with ideas about how to get started, and keep from getting overwhelmed in the world of the web.

She recommended taking the time to occasionally dive deep into a foundational topic, pointing to another talk as a perfect example; Ana Balica gave a great presentation all about HTTP. The second half of the talk was about HTTP 2 and was filled with practical advice, but the first part was a thoroughly geeky history of the Hypertext Transfer Protocol, which I really loved.

While I’m mentoring Amber, we’ve been trying to find a good balance between those deep dives into the foundational topics and the hands-on day-to-day skills needed for web development. So far, I think we’ve found a good balance.

When Amber is ‘round at the Clearleft office, we sit down together and work on the practical aspects of HTML, CSS, and (soon) JavaScript. Last week, for example, we had a really great day diving into CSS selectors and specificity—I watched Amber’s knowledge skyrocket over the course of the day.

But between those visits—which happen every one or two weeks—I’ve been giving Amber homework of sorts. That’s where the foundational building blocks come in. Here are the questions I’ve asked so far:

We’re still figuring out this whole mentorship thing but I think this balance of research and exercises is working out well.

Here’s another version of my talk Resilience—the same one I gave at Beyond Tellerrand—this time from the Render conference in Oxford.

A web for everyone

I gave the closing talk at the Render conference in Oxford a few weeks back. It was a very smoothly-run event, the spiritual successor to jQuery UK.

In amongst the mix of talks there were a few emerging themes. Animation was covered from a few different angles by Val and Sara. Bruce, Jake, Ola, and I talked about Service Workers and offline functionality. But there were also some differences of opinion.

In her great talk—I’m Offline, Cool! Now What?—Ola outlined the many and varied offline use cases that drove the creation and philosophy of Hoodie. She described all the reasons why people need the web; for communication, for access to information, for empowerment, and for love. “Hell, yes!” I thought.

But then she said:

So since when is helping people to fulfil a basic need, progressive enhancement?

And even more forcefully:

This is why I think, putting offline first in the progressive enhancement slot is pure bullshit.

Strong words indeed! And I have to say I was a little puzzled by them.

Ola had demonstrated again and again just how fragile the network could be. That is absolutely correct. All too often, we make the assumption that people using our sites have a decent network connection. That’s not a safe assumption to make.

But the suggested solution—to rely on technologies like local storage, Service Workers, or other APIs—assumes a certain level of JavaScript capabilities in the devices and browsers out there. That’s an unsafe assumption to make.

I remember discussing this with Alex from Hoodie a while back. I was confused by the cognitive dissonance I was observing. It seems to me that, laudable as Hoodie’s offline-first goals are, they are swapping out one unstable dependency—the network—for a different unstable dependency—a set of JavaScript APIs.

(I remember Alex pointed out that Hoodie was intended primarily for web apps rather than web sites, and my response—predictably enough—was to say “Define web app”.)

I wish we could make offline functionality a requirement. But the reality is that not everyone is using a browser that supports the necessary technology. I wish we could make beautiful typography a requirement. But, again, the reality is that there will always be some browsers or devices that won’t be capable of executing that typography. Accepting these facets of reality might seem like admissions of defeat, but I actually find it quite liberating.

In her brilliant talk at Render, Ashley G. Williams channeled Carl Sagan, quoting from his book The Demon-Haunted World:

It is far better to grasp the universe as it really is than to persist in delusion, however satisfying and reassuring.

Pointing out that you can’t always rely on client-side JavaScript shouldn’t be taken as an admonishment. It’s an opportunity.

Karolina Szczur wrote a wonderful piece on Ev’s blog called The Web Isn’t Uniform. She noticed how many sites—Facebook, AirBnB, Basecamp—failed to even render some useful information if the JavaScript fails to load. It’s a situation that many of us—with our fast connections, capable browsers, and modern devices—might never even notice.

It’s a privilege to be able to use breaking edge technologies and devices, but let’s not forget basic accessibility and progressive enhancement. Ultimately, we’re building for the users, not for our own tastes or preferences.

Karolina asks that we, as makers of the web, have a little more empathy. If the comments on her article are anything to go by, that’s a tall order. All the usual tropes are rolled out—there’s the misunderstanding that progressive enhancement means making sure everything works without JavaScript (it doesn’t; it’s about the core functionality), and the evergreen argument that as soon as you’re building a web “app”, that best practices, good engineering, and empathy can go out the window…

I strongly disagree that this has anything to do at all about empathy. Instead, it’s all about resources and priorities. Making a JS app is already hard enough, duplicating all that work so that it also works without JS is quite often just not practical.—Sacha Greif

But requiring that a site be functional when JavaScript is disabled, may not be a valid requirement anymore. HTML and CSS were originally created and designed for documents, not applications. Many websites these days should be considered apps rather then docs.—Dan Shappir

What you’re suggesting is that all these companies should write all their software twice, once in javascript and again in good ol’ html with forms, to cater to that point-whatever-percentage that has decided to break their own web browser by turning one of the three fundamental web technologies off. In what universe is this a reasonable request?—Erlend Halvorsen

JavaScript is as important as HTML. This is modern internet. If someone doesn’t have JavaScript, they should not be using the new applications that were possible because of JavaScript.—HarshaL

I am a web developer. I build web applications not web sites. What you say may be true for web sites with static pages displaying images and text.—R. Fancsiki

Ah, Medium! Where the opinions of self-entitled dudes flow like rain from the tech heavens.

While they were so busy defending the lack of basic functionality in all the examples that Karolina listed, they failed to notice the most important development:

Only couple hours later, thanks to @sstephenson, @basecamp is way more accessible without JS! That’s how you do it 👏 pic.twitter.com/cMsYGFhiKK

Let’s build a web that works for everyone. That doesn’t mean everyone has to have the same experience. Let’s accept that there are all sorts of people out there accessing the web with all sorts of browsers on all sorts of devices.

What a fantastic opportunity!