A lovely bit of audio work from Matthew Sherrett—six short spoken word pieces about the island of Rockall.

Feet on the Ground, Eyes on the Stars: The True Story of a Real Rocket Man with G.A. “Jim” Ogle

I listen to a lot of podcast episodes. The latest episode of the User Defenders podcast (which is very different from the usual fare) is one of my favourites—the life and times of a NASA engineer working on everything from Apollo to the space shuttle.

You know how they say it doesn’t take a rocket scientist? Well, my Dad is one. On a recent vacation to Florida to celebrate his 80th birthday, he spent nearly three hours telling me his compelling story.

A profile of Chesley Bonestell. It’s amazing to think how much of his work was produced before we had even left this planet.

Forget Hyperloop: this is some truly mindblowing technology from Elon Musk. In this latest test, the Grasshopper from SpaceX shows off its lateral movement for a reusable rocket.

Combine that with the sheer power of Falcon Heavy and you’ve got some amazing design and engineering. 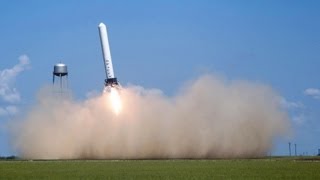 The Ballardian beauty of a dying Baikonour.

A masterplan for the moon as a global cemetery. Launch the ashes of your loved ones to the moon (leaving the buckyball container in lunarstationary orbit). Given enough ashes and enough buckyballs, the result is a fertile surface and a atmosphere-trapping layer of fullerine. Terraforming via recycled humans.

Or, if that’s too long-term for you, you can buy a scale-model moon jewel.

This remains one of the greatest pieces of documentary footage ever filmed.

So long, Juno. Call me when you get to Jupiter.

Space stasis: What the strange persistence of rockets can teach us about innovation. - By Neal Stephenson - Slate Magazine

An excellent historical overview of rocketry by Neal Stephenson.

I’m standing in an art gallery, looking at a painting. There’s a lump in my throat and a slight moistness to my eyes.

I’m at a concert, listening to a song. There’s a lump in my throat and a slight moistness to my eyes.

Looking at the painting reminded me of the song.

I was in Washington DC for An Event Apart. The art gallery in question was the Smithsonian American Art Museum. I went along to the Normal Rockwell exhibition that’s currently on show there.

The pictures are from the private collections of George Lucas and Steven Spielberg. They are fitting custodians of Rockwell’s legacy. As filmmakers, they excel at creating works that are somewhat schlocky, manipulative and commercial, all while being undeniably effective. That sums up the work of Norman Rockwell.

The collection on display in DC is exceptional. You would need a heart of stone not to smile at some point whilst perusing the paintings.

I’m standing in an art gallery, looking at a painting.

The painting is called Good Boy (Little Orphan at the Train). Every face in the picture tells its own story. A nun stands on a train platform, a little boy in her hands. Also on the platform, a well-to-do woman waits with some trepidation to take the boy. From the windows of the train’s carriage, more young children look on expectantly.

It’s a scene from a social experiment: the orphan trains:

The orphan trains ran between 1854 and 1929, relocating an estimated 200,000 orphaned, abandoned, or homeless children. At the time the orphan train movement began, it was estimated that 30,000 vagrant children were living on the streets of New York City.

They would typically arrive in a town where local community leaders had assembled interested townspeople. The townspeople would inspect the children and after brief interviews with the ones they wanted, take them home. After a trial period, some children became indentured servants to their host families, while most were adopted, formally or informally, as family members.

I’m at a concert, listening to a song.

I hadn’t heard of the orphan trains until I went to see Jim Roll playing a concert upstairs in The Prince Albert pub in Brighton. He spoke about his own grandfather, who was one of the orphans who travelled on a train from New York. Although he found a home with foster parents, his place in the family was never assured.

The song is called Eddie Rode The Orphan Train and it was later covered by Jason Ringenberg of Jason And The Scorchers fame.

Eddie rode the orphan train from Soho down to Arkansas and every stop along the way they promised him a rubber ball.

Telling Stories: Norman Rockwell from the Collections of George Lucas and Steven Spielberg runs from June 2nd until January 2nd at the American Art Museum.

The album Inhabiting The Ball by Jim Roll is available from Amazon.

There’s a lump in my throat and a slight moistness to my eyes.

Screw Chuck Norris. Douglas Crockford is the true originator of awesomeness in the audience.

Gravity's rainbow on a Google map.

An excellent overview of Ajax and optimisation.

Even though it breaks up after just two seconds in the air, the moment of take-off is pretty awesome.

This is the first picture of Earth taken from space, specifically from a V2 rocket 60 miles up.

Now when your satanic client tells you to make the logo bigger, you can always rock out.

Check out the beautiful use of Rockwell in this typographical interpretation of a scene from Pulp Fiction.