Most pundits call it “the Internet of Things” but there’s another phrase from Andy Huntington that I first heard from Russell Davies: “the Geocities of Things.” I like that.

I’ve never had much exposure to this world of hacking electronics. I remember getting excited about the possibilities at a Brighton BarCamp back in 2008:

I now have my own little arduino kit, a bread board and a lucky bag of LEDs. Alas, know next to nothing about basic electronics so I’m really going to have to brush up on this stuff.

I never did do any brushing up. But that all changed last week.

In short, it was great! And this time, I didn’t stop hacking when I got home.

First off, every workshop attendee gets a hand-picked box of goodies to play with and keep: an arduino mega, a wifi shield, sensors, screens, motors, lights, you name it. That’s the hardware side of things. There are also code samples and libraries that Seb has prepared in advance. 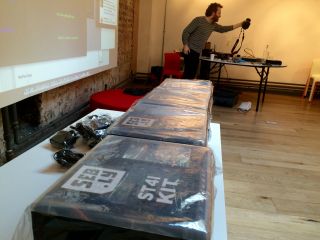 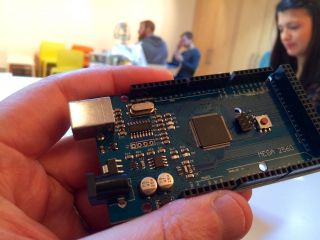 Now, remember, I lack even the most basic knowledge of electronics, but after two days of fiddling with this stuff, it started to click. 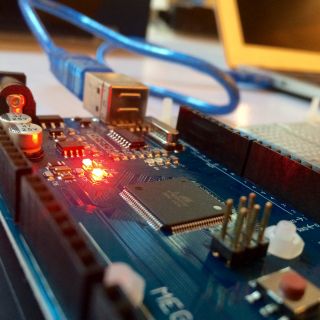 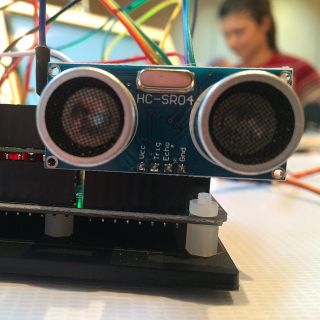 On the first workshop day, we all did the same exercises, connected things up, getting them to talk to the internet, that kind of thing. For the second workshop day, Seb encouraged us to think about what we might each like to build.

I was quite taken with the ability of the piezo buzzer to play rudimentary music. I started to wonder if there was a way to hook it up to The Session and have it play the latest jigs, reels, and hornpipes that have been submitted to the site in ABC notation. A little bit of googling revealed that someone had already taken a stab at writing an ABC parser for arduino. I didn’t end up using that code, but it convinced me that what I was trying to do wasn’t crazy.

So I built a machine that plays Irish traditional music from the internet. 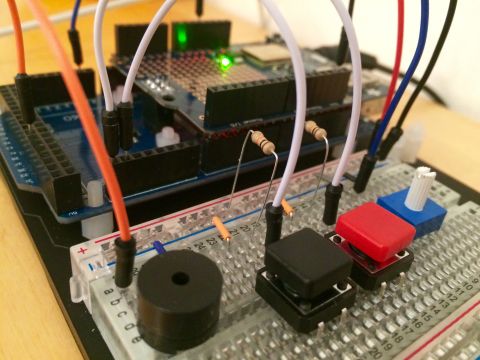 The hardware has a piezo buzzer, an “on” button, an “off” button, a knob for controlling the speed of the tune, and an obligatory LED.

The software has a countdown timer that polls a URL every minute or so. The URL is http://tune.adactio.com/. That in turn uses The Session’s read-only API to grab the latest tune activity and then get the ABC notation for whichever tune is at the top of that list. Then it does some cleaning up—removing some of the more advanced ABC stuff—and outputs a single line of notes to be played. I’m fudging things a bit: the device has the range of a tin whistle, and expects tunes to be in the key of D or G, but seeing as that’s at least 90% of Irish traditional music, it’s good enough.

I added one more lo-fi modification. I rolled up a piece of paper and placed it over the piezo buzzer to amplify the sound. It works surprisingly well. It’s loud! 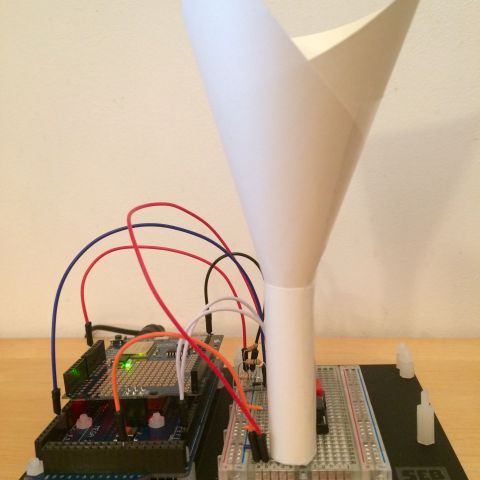 I’ll keep tinkering with it. It’s fun. I realise I’m coming to this whole hardware-hacking thing very late, but I get it now: it really does feel similar to that feeling you would get when you first figured out how to make a web page back in the days of Geocities. I’ve built something that’s completely pointless for most people, but has special meaning for me. It’s ugly, and it’s inefficient, but it works. And that’s a great feeling.

(P.S. Seb will be running his workshop again on the 3rd and 4th of February, and there will a limited amount of early-bird tickets available for one hour, between 11am and midday this Thursday. I highly recommend you grab one.)

ST4I - Stuff That Talks To The Internet - workshop on Vimeo

Seb will be running this workshop again at the start of February—details here. I can’t recommend it highly enough—it’s so, so good!