City of Women encourages Londoners to take a second glance at places we might once have taken for granted by reimagining the iconic Underground map.

I love everything about this …except that there’s no Rosalind Franklin station.

Space Elevators: How a sci-fi dream could be built today

Surveying the current practical and theoretical factors for and against space elevators (including partial elevators—skyhooks!).

An Orbital Ring System as an alternative to a space elevator.

Representing nothing short of the most ambitious project in the history of space exploration and exploitation, the Orbital Ring System is more or less what you would imagine it to be, a gargantuan metal ring high above the Earth, spanning the length of its 40,000 kilometer-long diameter.

Living Through The Future

You can listen to audio version of Living Through The Future.

On the one hand, there’s nothing particularly futuristic about living through a pandemic. They’ve occurred throughout history and this one could’ve happened at any time. We just happen to have drawn the short straw in 2020. Really, this should feel like living in the past: an outbreak of a disease that disrupts everyone’s daily life? Nothing new about that.

But there’s something dizzyingly disconcerting about the dominance of technology. This is the internet’s time to shine. Think you’re going crazy now? Imagine what it would’ve been like before we had our network-connected devices to keep us company. We can use our screens to get instant updates about technologies of world-shaping importance …like beds and face masks. At the same time as we’re starting to worry about getting hold of fresh vegetables, we can still make sure that whatever meals we end up making, we can share them instantaneously with the entire planet. I think that, despite William Gibson’s famous invocation, I always figured that the future would feel pretty futuristic all ‘round—not lumpy with old school matters rubbing shoulders with technology so advanced that it’s indistinguishable from magic.

When I talk about feeling like I’m living in the future, I guess what I mean is that I feel like I’m living at a time that will become History with a capital H. I start to wonder what we’ll settle on calling this time period. The Covid Point? The Corona Pause? 2020-P?

At some point we settled on “9/11” for the attacks of September 11th, 2001 (being a fan of ISO-8601, I would’ve preferred 2001-09-11, but I’ll concede that it’s a bit of a mouthful). That was another event that, even at the time, clearly felt like part of History with a capital H. People immediately gravitated to using historical comparisons. In the USA, the comparison was Pearl Harbour. Outside of the USA, the comparison was the Cuban missile crisis.

Another comparison between 2001-09-11 and what we’re currently experiencing now is how our points of reference come from fiction. Multiple eyewitnesses in New York described the September 11th attacks as being “like something out of a movie.” For years afterwards, the climactic showdowns in superhero movies that demolished skyscrapers no longer felt like pure escapism.

For The Situation, there’s no shortage of prior art to draw upon for comparison. If anthing, our points of reference should be tales of isolation like Robinson Crusoe. The mundane everyday tedium of The Situation can’t really stand up to comparison with the epic scale of science-fictional scenarios, but that’s our natural inclination. You can go straight to plague novels like Stephen King’s The Stand or Emily St. John Mandel’s Station Eleven. Or you can get really grim and cite Cormac McCarthy’s The Road. But you can go the other direction too and compare The Situation with the cozy catastrophes of John Wyndham like Day Of The Triffids (or just be lazy and compare it to any of the multitude of zombie apocalypses—an entirely separate kind of viral dystopia).

In years to come there will be novels set during The Situation. Technically they will be literary fiction—or even historical fiction—but they’ll feel like science fiction.

I remember the Chernobyl disaster having the same feeling. It was really happening, it was on the news, but it felt like scene-setting for a near-future dystopian apocalypse. Years later, I was struck when reading Wolves Eat Dogs by Martin Cruz-Smith. In 2006, I wrote:

Halfway through reading the book, I figured out what it was: Wolves Eat Dogs is a Cyberpunk novel. It happens to be set in present-day reality but the plot reads like a science-fiction story. For the most part, the book is set in the post-apocolyptic landscape of Prypiat, near Chernobyl. This post-apocolyptic scenario just happens to be real.

The protagonist, Arkady Renko, is sent to this frightening hellish place following a somewhat far-fetched murder in Moscow. Killing someone with a minute dose of a highly radioactive material just didn’t seem like a very realistic assassination to me.

Then I saw the news about Alexander Litvinenko, the former Russian spy who died this week, quite probably murdered with a dose of polonium-210.

I’ve got the same tingling feeling about The Situation. Fact and fiction are blurring together. Past, present, and future aren’t so easy to differentiate.

I really felt it last week standing in the back garden, looking up at the International Space Station passing overhead on a beautifully clear and crisp evening. I try to go out and see the ISS whenever its flight path intersects with southern England. Usually I’d look up and try to imagine what life must be like for the astronauts and cosmonauts on board, confined to that habitat with nowhere to go. Now I look up and feel a certain kinship. We’re all experiencing a little dose of what that kind of isolation must feel like. Though, as the always-excellent Marina Koren points out:

The more experts I spoke with for this story, the clearer it became that, actually, we have it worse than the astronauts. Spending months cooped up on the ISS is a childhood dream come true. Self-isolating for an indefinite period of time because of a fast-spreading disease is a nightmare.

Whenever I look up at the ISS passing overhead I feel a great sense of perspective. “Look what we can do!”, I think to myself. “There are people living in space!”

Last week that feeling was still there but it was tempered with humility. Yes, we can put people in space, but here we are with our entire way of life put on pause by something so small and simple that it’s technically not even a form of life. It’s like we’re the martians in H.G. Wells’s War Of The Worlds; all-conquering and formidable, but brought low by a dose of dramatic irony, a Virus Ex Machina.

Yesterday was Wednesday. Wednesday evening is when I play in an Irish trad session at The Jolly Brewer. It’s a highlight of my week.

Needless to say, there was no session yesterday. I’ll still keep playing tunes while we’re all socially distancing, but it’s not quite the same. I concur with this comment:

COVID-19 has really made me realize that we need to be grateful for the people and activities we take for granted. Things like going out for food, seeing friends, going to the gym, etc., are fun, but are not essential for (physical) survival.

But it’s not the same though, is it?

I think about the book Station Eleven a lot. The obvious reason why I’d be thinking about it is that it describes a deadly global pandemic. But that’s not it. Even before The Situation, Station Eleven was on my mind for helping provide clarity on the big questions of life; y’know, the “what’s it all about?” questions like “what’s the meaning of life?”

Part of the reason I think about Station Eleven is its refreshingly humanist take on a post-apocalyptic society. As I discussed on this podcast episode a few years back:

It’s interesting to see a push-back against the idea that if society is removed we are going to revert to life being nasty, brutish and short. Things aren’t good after this pandemic wipes out civilisation, but people are trying to put things back together and get along and rebuild.

Related to that, Station Eleven describes a group of people in a post-pandemic world travelling around performing Shakespeare plays. At first I thought this was a ridiculous conceit. Then I realised that this was the whole point. We don’t have to watch Shakespeare to survive. But there’s a difference between surviving and living.

I was chatting with Rachel at work the other day about conversational forms, and I mentioned that I kicked that whole thing off with the mad libs style form on Huffduffer. Here’s the research that Luke later did on whether this style of form could increase conversion.

Ever wondered what would happen if you threw a ball inside an orbital habitat? Well, wonder no more!

You can adjust the parameters of the space station, or choose from some pre-prepared examples: an O’Neill cylinder, a Stanford torus, a Bernal sphere, Rama, a Culture orbital…

Scroll around this massive video of a timelapse of one day’s footage from the Himawari 8 satellite in geostationary orbit around our homeworld.

From the library of Alexandria to the imagined canals of mars to the spots on the sun, this is a beautifully written examination of the chronology contained within the bristlecone pine.

The oldest of the living bristlecones were just saplings when the pyramids were raised. The most ancient, called Methuselah, is estimated to be more than 4,800 years old; with luck, it will soon enter its sixth millennium as a living, reproducing organism. Because we conceive of time in terms of experience, a life spanning millennia can seem alien or even eternal to the human mind. It is hard to grasp what it would be like to see hundreds of generations flow out from under you in the stream of time, hard to imagine how rich and varied the mind might become if seasoned by five thousand years of experience and culture.

There is only the briefest passing mention of the sad story of Don Currey.

If you’re going to make a manifest file for an existing site, start with this very handy tool. You give it the URL of your site and it then parses the content for existing metadata to create a best first stab at a manifest JSON file.

How We Could Actually Build a Space Colony - Popular Mechanics

A gallery of all your standard space stations: the Stanford Torus, the Bernal Sphere and the O’Neill Cylinder.

This looks crazy! Everyone is dancing to the beat of a different drum... I mean, iPod. 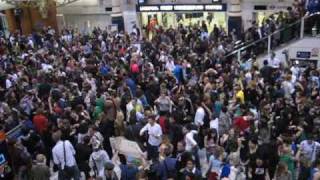