I went and spoke at an actual real live conference. As expected, it felt good …and weird. All at the same time.

It felt strange to be inside a building with other humans sharing an experience. At times it felt uncomfortable. The speaker’s dinner the night before the conference was lovely …and anxiety-inducing. Not just because it was my first time socialising in ages, but also just because it was indoors. I’ve been avoid indoor dining.

But the travel to Zürich all went smoothly. The airport wasn’t too busy. And on the airplane, everyone was dutifully masked up.

There’s definitely more paperwork and logistics involved in travelling overseas now. Jessica and I had to fill in our passenger locator forms for Switzerland and the UK. We also needed to pre-book a Covid test for two days after we got back. And we had to get a Covid test while we were in Switzerland so that we could show a negative result on returning to England. It doesn’t matter if you’re double-vaccinated; these tests are mandatory, which is totally fair.

Fortunately the conference organisers took care of booking those tests, which was great. On the first day of the conference I ducked out during the first break to go to the clinic next door and have a swab shoved up my nose. Ten minutes later I was handed a test result—negative!—complete with an official-looking stamp on it.

Two days later, after the conference was over, we had time to explore Zürich before heading to the airport to catch our evening flight. We had a very relaxing day which included a lovely boat trip out on the lake.

It was when we got to the airport that the relaxation ended.

We showed up at the airport in loads of time. I subscribe to the Craig Mod school of travel anyway, but given The Situation, I wanted to make sure we accounted for any extra time needed.

We went through security just fine and waited around for our gate to come up on the screen of gates and flights. Once we had a gate, we made our way there. We had to go through passport control but that didn’t take too long.

At the gate, there was a queue so—being residents of England—we immediately got in line. The airline was checking everyone’s paperwork.

When we got to the front of the line, we showed all our documents. Passport? Check. Boarding pass? Check. Passenger locator form? Check. Negative Covid result? Che …wait a minute, said the member of staff, this is in German. According to gov.uk, the test result needs to be in English, French, or Spanish.

I looked at the result. Apart from the heading at the top, all of the actual information was international: names, dates, and the test result itself said “neg.”

My heart sank. “Call or email the clinic where you got the result. Get them to send you an English or French version” said the airline representative. Okay. We went off to the side and started doing that.

At this point there was still a good 40 or 50 minutes ’till the flight took off. We could sort this out.

I phoned the clinic. It was late Saturday afternoon and the clinic was closed. Shit!

Jessica and I went back to the gate agent we were dealing with and began pleading our case (in German …maybe that would help). She was very sympathetic but her hands were tied. Then she proposed a long shot. There was a Covid-testing centre in the airport. She would call them and tell them we were coming. But at this point it was 35 minutes until the flight left. We’d really have to leg it.

She scribbled down vague directions for where we had to go, and we immediately pelted off.

At this point I feel I should confess. I did not exhibit grace under pressure. I was, to put it mildy, freaking out.

Perhaps because I was the one selfishly indulging in panic, Jessica kept her head. She reminded me that we weren’t travelling to a conference—there wasn’t anywhere we had to be. Worst case scenario, we’d have to spend an extra night in Zürich and get a different flight tomorrow. She was right. I needed to hear that.

I was still freaking out though. We were running around like headless chickens trying to find where we needed to go. The instructions had left out the crucial bit of information that we actually needed to exit through passport control (temporarily re-entering Swiss territory) in order to get to the testing centre. Until we figured that out, we were just running hither and tither in a panic while the clock continued to count down.

Even the reason for this panicked situation felt like it had a dream logic to it. You know when you wake up from a bad dream and you examine the dream in retrospect and you realise it doesn’t actually make any sense? Well, that’s how this felt. You’ve got a negative test result but it needs it to be in one of these three languages …I mean, that sounds like the kind of nonsensical reasoning that should dissolve upon awakening.

Time was slipping away. Our flight leaves in twenty minutes.

Finally we realise that we need to go back through passport control. On the other side we run around some more until we spot the location that matches the vague description we’ve been given. There’s a sign! Covid testing centre!

We burst in through the doors. The gate agent had called ahead so we were expected. The young doctor on duty was cool as a cucumber. He must have to deal with this situation all day long. He calmly got us both to start filling in the appropriate online forms to pay for the tests, but instead of waiting for us to finish doing that, he started the testing straight away. Smart!

This felt like another nightmare I’ve had. I don’t mean having a swab shoved up my nose until it tickles my brain—that was probably the least uncomfortable part of this whole ordeal. I mean I need to fill out this web form accurately. On a touch screen device. And do it as quickly as possible!

Well, we did it. Filled in the forms, got the swabs. But now it was less than fifteen minutes until our flight time and we knew we still had to get back through passport control where there were lines of people.

“You’ll have the test results by email in ten minutes,” said the doctor. “Go!”

We sprinted out of there and went straight for the passport lines. Swallowing my pride, I went to the people at the end of a line. “Our flight leaves in ten minutes! Can we please cut in front!?”

Right, next line. “Our flight leaves in…”

“Thank you! Thank you so much!”

We repeated this craven begging until we got to the front of the line and gave our passports to the same guy who had orginally stamped them first time we came through. He was unfazed.

Then we ran back to the gate. Almost everyone had boarded by this point, but the gate was still open. Maybe we could actually make it!

But we still needed our test results. We both stood at the gate with our phones in hand, the email app open, frantically pulling to refresh.

The minutes were ticking by. At this point the flight departure time had arrived, but the gate agent said there was a slight delay. They could wait one or two minutes more.

“I’ve got mine!” shouted Jessica. Half a minute later, mine showed up.

We showed the gate agent the results. She stamped whatever needed to be stamped and we were through.

I couldn’t believe it! Just 15 minutes ago I had been thinking we might as well give up—there was absolutely no way we were going to make it.

But here we were boarding the plane.

We got to our seats and strapped in. We were both quite sweaty and probably looked infectious …but we also had fresh proof that neither of had the ’rona.

We just sat there smiling, looking at each other, and shaking our heads. I just couldn’t believe we had actually made it.

The captain made an announcement. They were having a little technical difficulty with the plane’s system—no doubt the cause of the slight delay, luckily for us. They were going to reboot the system in the time-honoured fashion of turning it off and again.

The lights briefly went out and then came back on as the captain executed this manouvre.

Meanwhile Jessica and I were coming down from our adrenaline rush. Our breathing was beginning to finally slow down.

The captain’s voice came on again. That attempt at fixing the glitch hadn’t worked. So to play it safe, we were going to switch planes. The new plane would take off in an hour and a half from a different gate.

As the other passengers tutted and muttered noises of disapproval, Jessica and I just laughed. A delay? No problem!

But oh, the Alanis Morissette levels of irony! After all that stress at the mercy of the ticking clock, it turned out that time was in plentiful supply after all.

Everything after that proceeded without incident. We got on the replacement plane. We flew back to England. We breezed across the border and made our way home.

It felt good to be home.

This is the stuff James Bond stories are made of. Except in this case, the fortress exists to store data rather than criminal masterminds. 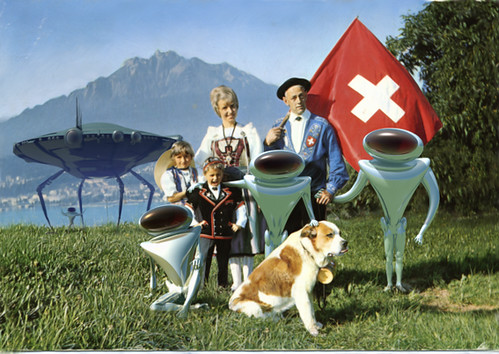 One of the services we offer at Clearleft is on-site training… a bit of this, a bit of that. It’s something that I really enjoy. Not only do I get to spend a day talking incessantly about the technologies that tickle my fancy, I also get to travel and meet web developers who are digging away at the coalface behind their company firewalls.

Thus far, our little roadshow has travelled within the UK to companies in London, York, and elsewhere. This week, we’re spreading our wings a little further. On Friday, I’ll be doing some DOM Scripting training in Basel, Switzerland located right on the nexus of France, Germany and the Confoederatio Helvetica.

It won’t be my first time to Basel. I’ve been there on a few occasions, mostly for the unique annual spectacle of the Morgensterich carnival. I used to live fairly close by, over the border in Freiburg, Germany.

I arrived in Freiburg many years ago with my bouzouki in hand and started busking on the streets. I ended up staying for about five or six years. Along the way I met Jessica, worked in a bakery and played bass in a surf-rock band. Then that whole web thing came along and set me on my present course.

I haven’t been back to Freiburg since moving to England six years ago. Seeing as I’m going to be in Basel anyway, I think I’ll take a trip up to the old town this weekend. I’ll revisit my old haunts and revisit the beer and wurst while I’m at it.

I hope my German hasn’t become too rusty in the intervening time. I guess I’ll find out if I’m able to comprehend the Schweizerdeutsch spoken in Basel.

Expect my Flickr photostream to fill up with pictures of Freiburg’s quaint alleyways and its wonderful cathedral. Tchüß… bis später.