As soon as tickets were available for the Brighton premiere of Rogue One, I grabbed some—two front-row seats for one minute past midnight on December 15th. No problem. That was the night after the Clearleft end-of-year party on December 14th.

Then I realised how dates work. One minute past midnight on December 15th is the same night as December 14th. I had double-booked myself.

It’s a nice dilemma to have; party or Star Wars? I decided to absolve myself of the decision by buying additional tickets for an evening showing on December 15th. That way, I wouldn’t feel like I had to run out of the Clearleft party before midnight, like some geek Cinderella.

In the end though, I did end up running out of the Clearleft party. I had danced and quaffed my fill, things were starting to get messy, and frankly, I was itching to immerse myself in the newest Star Wars film ever since Graham strapped a VR headset on me earlier in the day and let me fly a virtual X-wing. 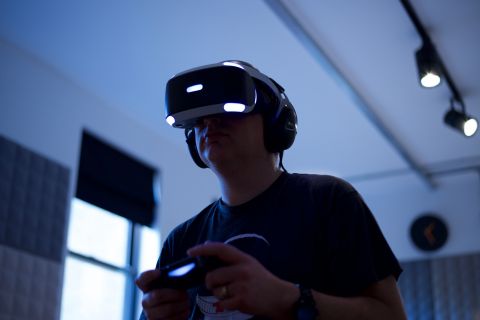 So, somewhat tired and slightly inebriated, I strapped in for the midnight screening of Rogue One: A Star Wars Story.

I thought it was okay. Some of the fan service scenes really stuck out, and not in a good way. On the whole, I just wasn’t that gripped by the story. Ah, well.

Still, the next evening, I had those extra tickets I had bought as psychological insurance. “Why not?” I thought, and popped along to see it again.

This time, I loved it. It wasn’t just me either. Jessica was equally indifferent the first time ‘round, and she also enjoyed it way more the second time.

I can’t recall having such a dramatic swing in my appraisal of a film from one viewing to the next. I’m not quite sure why it didn’t resonate the first time. Maybe I was just too tired. Maybe I was overthinking it too much, unable to let myself get caught up in the story because I was over-analysing it as a new Star Wars film. Anyway, I’m glad that I like it now.

Much has been made of its similarity to classic World War Two films, which I thought worked really well. But the aspect of the film that I found most thought-provoking was the story of Galen Erso. It’s the classic tale of an apparently good person reluctantly working in service to evil ends.

This reminded me of Mother Night, perhaps my favourite Kurt Vonnegut book (although, let’s face it, many of his books are interchangeable—you could put one down halfway through, and pick another one up, and just keep reading). Mother Night gives the backstory of Howard W. Campbell, who appears as a character in Slaughterhouse Five. In the introduction, Vonnegut states that it’s the one story of his with a moral:

If Galen Erso is pretending to work for the Empire, is there any difference to actually working for the Empire? In this case, there’s a get-out clause for this moral dilemma: by sabotaging the work (albeit very, very subtly) Galen’s soul appears to be absolved of sin. That’s the conclusion of the excellent post on the Sci-fi Policy blog, Rogue One: an ‘Engineering Ethics’ Story:

What Galen Erso does is not simply watch a system be built and then whistleblow; he actively shaped the design from its earliest stages considering its ultimate societal impacts. These early design decisions are proactive rather than reactive, which is part of the broader engineering ethics lesson of Rogue One.

I know I’m Godwinning myself with the WWII comparisons, but there are some obvious historical precedents for Erso’s dilemma. The New York Review of Books has an in-depth look at Werner Heisenberg and his “did he/didn’t he?” legacy with Germany’s stalled atom bomb project. One generous reading of his actions is that he kept the project going in order to keep scientists from being sent to the front, but made sure that the project was never ambitious enough to actually achieve destructive ends:

What the letters reveal are glimpses of Heisenberg’s inner life, like the depth of his relief after the meeting with Speer, reassured that things could safely tick along as they were; his deep unhappiness over his failure to explain to Bohr how the German scientists were trying to keep young physicists out of the army while still limiting uranium research work to a reactor, while not pursuing a fission bomb; his care in deciding who among friends and acquaintances could be trusted.

Speaking of Albert Speer, are his hands are clean or dirty? And in the case of either answer, is it because of moral judgement or sheer ignorance? The New Atlantis dives deep into this question in Roger Forsgren’s article The Architecture of Evil:

Speer indeed asserted that his real crime was ambition — that he did what almost any other architect would have done in his place. He also admitted some responsibility, noting, for example, that he had opposed the use of forced labor only when it seemed tactically unsound, and that “it added to my culpability that I had raised no humane and ethical considerations in these cases.” His contrition helped to distance himself from the crude and unrepentant Nazis standing trial with him, and this along with his contrasting personal charm permitted him to be known as the “good Nazi” in the Western press. While many other Nazi officials were hanged for their crimes, the court favorably viewed Speer’s initiative to prevent Hitler’s scorched-earth policy and sentenced him to twenty years’ imprisonment.

I wish that these kinds of questions only applied to the past, but they are all-too relevant today.

Software engineers in the United States are signing a pledge not to participate in the building of a Muslim registry:

We refuse to participate in the creation of databases of identifying information for the United States government to target individuals based on race, religion, or national origin.

That’s all well and good, but it might be that a dedicated registry won’t be necessary if those same engineers are happily contributing their talents to organisations whose business models are based on the ability to track and target people.

But now we’re into slippery slopes and glass houses. One person might draw the line at creating a Muslim registry. Someone else might draw the line at including any kind of invasive tracking script on a website. Someone else again might decide that the line is crossed by including Google Analytics. It’s moral relativism all the way down. But that doesn’t mean we shouldn’t draw lines. Of course it’s hard to live in an ideal state of ethical purity—from the clothes we wear to the food we eat to the electricity we use—but a muddy battleground is still capable of having a line drawn through it.

The question facing the fictional characters Galen Erso and Howard W. Campbell (and the historical figures of Werner Heisenberg and Albert Speer) is this: can I accomplish less evil by working within a morally repugnant system than being outside of it? I’m sure it’s the same question that talented designers ask themselves before taking a job at Facebook.

At one point in Rogue One, Galen Erso explicitly invokes the justification that they’d find someone else to do this work anyway. It sounds a lot like Tim Cook’s memo to Apple staff justifying his presence at a roundtable gathering that legitimised the election of a misogynist bigot to the highest office in the land. I’m sure that Tim Cook, Elon Musk, Jeff Bezos, and Sheryl Sandberg all think they are playing the part of Galen Erso but I wonder if they’ll soon find themselves indistinguishable from Orson Krennic.

2081 - Everyone Will Finally Be Equal

The classic Kurt Vonnegut short story Harrison Bergeron has been turned into a film. I hope it doesn't suck.